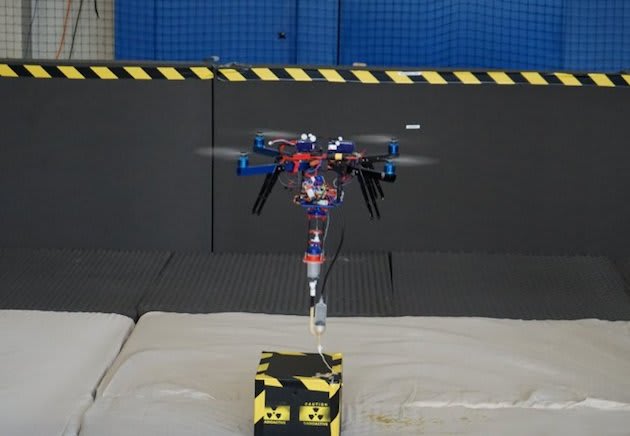 Flying drones with 3D printers attached to their body: it was only a matter of time until the two technologies met. Such a thing now exists, although we're not quite sure it's earned its printing qualification yet. Developed by a team at the Imperial College London, the "3D printing Micro Aerial Vehicle (MAV)" is a quad-copter that carries two chemicals that create polyurethane foam when mixed. Scientists say the foam can be molded to create non-complex structures or repair components, making the drone especially useful in hard-to-reach areas. The substance is also extremely sticky, which allows teams of drones to work together to remove dangerous objects from hazardous locations. Like the video below shows, the quad-copter can swoop in and "print" a layer of sticky foam, which will then stick to the underside of a bigger and more powerful drone so it can be transported away.

Scientists drew inspiration from nature when developing the MAV, mostly notably the the swiftlet. The swiftlet is a small bird that builds nests entirely from threads of their saliva. Right now, the drone can only fly in controlled environments using sensors that feed real-time information back to a laptop. The next step will see the team equip the quad-copter with high-speed cameras, sensors and even solar panels, allowing it to fly autonomously and charge itself in any environment.

Via: CNET
Source: Imperial College London
In this article: 3d, 3d printing, drone, mav, printer, robot
All products recommended by Engadget are selected by our editorial team, independent of our parent company. Some of our stories include affiliate links. If you buy something through one of these links, we may earn an affiliate commission.