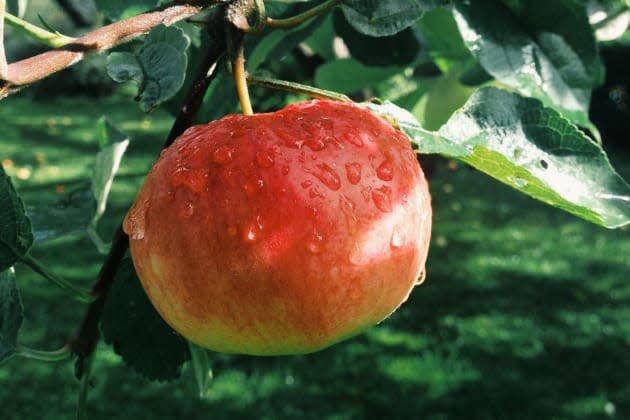 If DNA is code, and code can be art, then DNA can be art... right? Harvard artist in residence Joe Davis certainly thinks so. He's working on a project, Malus Ecclesia, that will insert Wikipedia entries into the non-essential genetic strands of apples. The effort will translate English Wikipedia articles to DNA's four nucleotide letters (A, C, G and T) and use bacteria to insert the resulting text into saplings. When the saplings are grafted on to apple stock and grow up, they'll bear fruit with that genetic data (and therefore the articles) intact, producing very real trees of knowledge.

Davis' living artwork won't be as revelatory as the biblical tree, though. The bacteria can only hold a few thousand words, while Wikipedia has roughly 2.5 billion; it will take a large grove to hold the entire database. You probably also won't get to take a bite, since there are tough US regulations on genetically modified plants. Even so, it should be an impressive feat if everything goes as planned -- and it could serve as a proof of concept for other, more practical uses of genes as storage systems.

In this article: apple, biology, dna, fruit, genetics, harvard, harvarduniversity, malusecclesia, science, treeofknowledge
All products recommended by Engadget are selected by our editorial team, independent of our parent company. Some of our stories include affiliate links. If you buy something through one of these links, we may earn an affiliate commission.