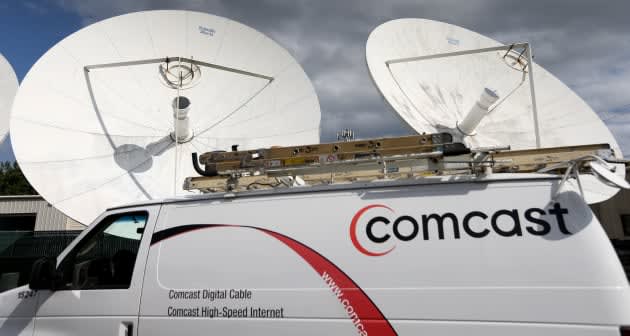 So much for Comcast's proposed merger with Time Warner Cable being good for your internet service. The cable giant's David Cohen tells investors that he expects "usage-based billing" (that is, data caps with overage fees) to reach all Comcast customers within five years. While he's not saying exactly when or how this would expand beyond the cap system's limited existing footprint, the company would gradually increase caps as demand goes up to make sure that the "vast majority" of users don't bump into it. Cohen doesn't anticipate having complex plans that force people to worry about their usage, but he warns that it's hard to make long-term predictions. "Five years ago I don't know that I would have heard of something called an iPad," he says.

Cohen isn't convinced that caps will come up in the Time Warner deal's approval process, as they reportedly have "nothing to do with [the] transaction." They may come up as the FCC drafts its new net neutrality rules, he says. However, it won't be surprising if opponents to the merger (and possibly regulators) bring up the possible restrictions in spite of the executive's opinions. While caps are officially meant to reduce network congestion, critics argue that they're frequently intended both as revenue generators and as weapons against online services that compete with TV. Comcast may have to show officials that it won't use data limits to protect its traditional cable business -- and that won't be easy when the corporation is already getting flak for its connection deal with Netflix.

Via: Ars Technica, DSL Reports
Source: Reuters (Shareholder.com)
In this article: caps, comcast, data, datacaps, hdpostcross, internet, internetserviceprovider, isp, netneutrality, networking, timewarnercable
All products recommended by Engadget are selected by our editorial team, independent of our parent company. Some of our stories include affiliate links. If you buy something through one of these links, we may earn an affiliate commission.