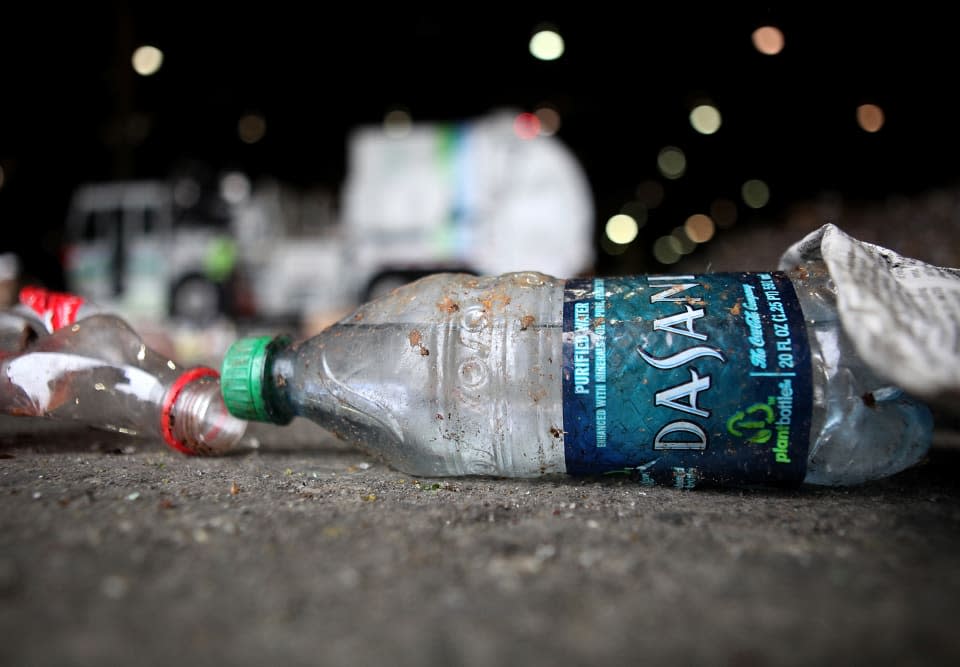 IBM's had a breakthrough in accelerated materials science and it's owed, in part, to a Dasani water bottle. It sounds simplistic, but the discovery of a new polymer that's not only super strong, but can also be made to be flexible and self-healing really was the happy accident of one researcher's focus on "green" chemistry and recyclable materials (i.e., plastic water bottles).

Dr. Jeannette Garcia, a principal researcher for the project, was in the lab experimenting with the creation of high-performance materials when she stumbled upon this new polymer. "I made an error weighing out one of my starting materials and found that... [the new material] plugged up," she said. That resulting substance was so tightly bonded, Garcia had to smash the flask with a hammer just to get it out. She also tried hitting the substance with the hammer to see if it would break. It didn't.

The brilliance of IBM Research's new polymer discovery, the results of which have been published in the journal Science today, is its potential to upend production in countless industries, like transportation or microelectronics. And much of that impact is something the team and future partners are just now starting to figure out. But before we wade into its future applications, let's answer the question that's likely on your mind: What is a polymer, other than a word that makes your eyes immediately glaze over?

Polymers are long, repeating chains of molecules and they're a part of pretty much everything around you: your sneakers, the motherboard of your computer, cars, adhesives, sports equipment, trash bags, milk containers, etc. But despite the use of polymers in nearly all aspects of our modern world, not much research has been done in the past two decades to develop new materials, or polymer-forming reactions.

Dr. James Hedrick, an IBM researcher who worked on the project, pointed to the costs involved, saying that polymer research is not just a mature field -- it's been around since the 1950s -- it's also a very expensive one for companies to explore. IBM funnels about $6 billion annually into its research arm, so the team was fortunate to benefit from the company's financial support and computational prowess. The latter of which was crucial in helping them reverse engineer the polymer created during that lab accident. So far, IBM's Research team has been able to create two distinct properties from this new polymer: super strong and self-healing. And it's not hard to conceive of the immediate applications for the super strong polymer, either. As Hedrick mused, it could replace aluminum and lead to the creation of lightweight, reinforced and recyclable car parts that "help reduce our dependence on fossil fuels," or even help manufacturers reduce fabrication costs by reusing defective chips.

So far, IBM's Research team has been able to create two distinct properties from this new polymer: super strong and self-healing.

The Wolverine-like liquid polymer, on the other hand, lends itself well to far more outside-the-box applications. This organo-gel, which Garcia describes as a "flexible rubber band type of material," is made up of 90 percent liquid and will reform after being cut into pieces without external stimuli, so long as they're placed in close proximity. I joked that this would be great for self-healing paint, since any nicks and scrapes would essentially be erased from sight, and expected the team to balk at my amateur idea. But instead Garcia and Hedrick seemed to ponder the suggestion seriously. In fact, the two explained that they'd already been discussing its use in fingernail polish, so my concept wasn't too far off the mark. Of course, there are other, less obvious applications for it, like skincare, for example, or as a slow release mechanism for perfumes.

Though I pressed the team for specifics as to what products we might see stem from this project in the near future, neither would divulge much, hinting only at developments in the mobile space. Since the principle discovery, however, Hedrick and Garcia have stumbled upon four new properties for the polymer and told me to expect more announcements within the next year. "This is just the beginning," Garcia said.

In this article: IBM, ibm polymer research, ibmpolymerresearch, IBMresearch, materialsscience, polymer, research, self-healing, TL16OOPS, video, wolverine
All products recommended by Engadget are selected by our editorial team, independent of our parent company. Some of our stories include affiliate links. If you buy something through one of these links, we may earn an affiliate commission.