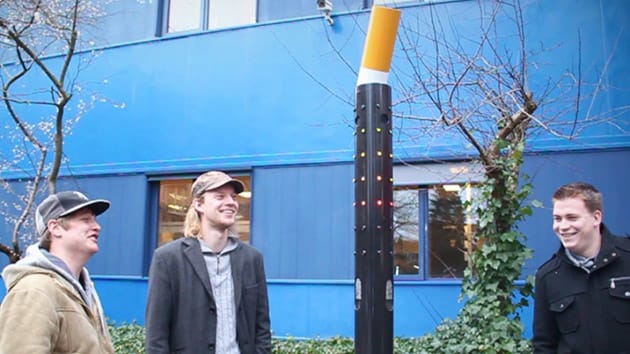 Some places impose hefty fines to prevent cigarette littering, but a group of Dutch designers believe that the answer lies in rewarding smokers for doing the right thing instead. So, the team designed a souped up trash can called Fumo that lights up like a disco ball and plays music like a jukebox when you toss in a cigarette butt. It even starts blinking the moment you step close, just so you know it's not some boring receptacle before you even get the chance to try it out -- and no, check the calendar if you must, it's not an April Fool's joke. The designers say the trash can can also be tweaked depending on the purpose: for instance, it can incorporate interactive elements for festivals or play solemn music if it's meant to be installed in front of a hospital. According to a recent research, around 4.5 trillion cigarette remnants end up as trash every year, so it really is a big issue that might only be solved by banning filters altogether. As to whether Fumo has the potential to minimize cigarette litter or if it's just a gimmicky idea whose novelty will wear off quickly, you tell us after watching it in action after the break.

Via: Fast Company
Source: ioglo
In this article: cigarettes, design, dutch, trash, TrashCan
All products recommended by Engadget are selected by our editorial team, independent of our parent company. Some of our stories include affiliate links. If you buy something through one of these links, we may earn an affiliate commission.