Tidal is the first music streaming service to accept Venmo 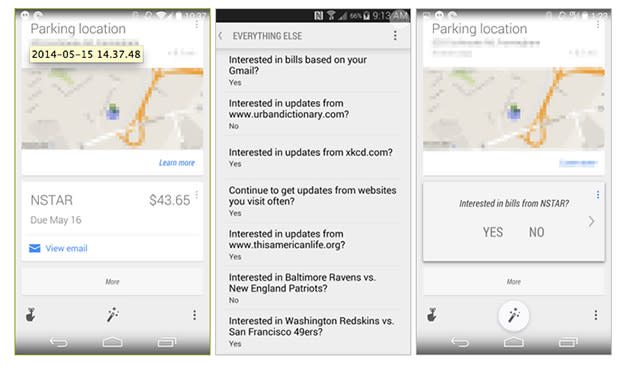 ​Google Now, with cards displaying info for your upcoming flights and shipment tracking, is becoming more and more useful. The latest improvement to Mountain View's virtual assistant integrates billing reminders based on your emails. A tipster sent screens of the new feature to Android Police, though it doesn't look like billing has rolled out to all users yet. If you do see it on your phone, you'll only get basic information about your accounts, such as when a bill is due and how much you owe.

Based on a teardown of the Google Now APK, which reveals other options such as viewing minimum payments and previous balances, we'll probably see new billing features added to Google Now at the time. Most helpful would be an option to head to your account via a "Pay now" link, and there's no reason to think Google wouldn't add in such functionality. Some billing providers have deeper integration than others, though, so the amount of information you'll see will vary.

To check if you've received the update, head to the "Everything Else" section in Google Now. The service will ask you if you're interested in information in bills based on messages in your Gmail. And let us know if you're seeing the feature by commenting below.

In this article: billing, billing integration, google, google now, google now update
All products recommended by Engadget are selected by our editorial team, independent of our parent company. Some of our stories include affiliate links. If you buy something through one of these links, we may earn an affiliate commission.