Disarm a bomb with your hand, a robot arm and Leap-motion controller 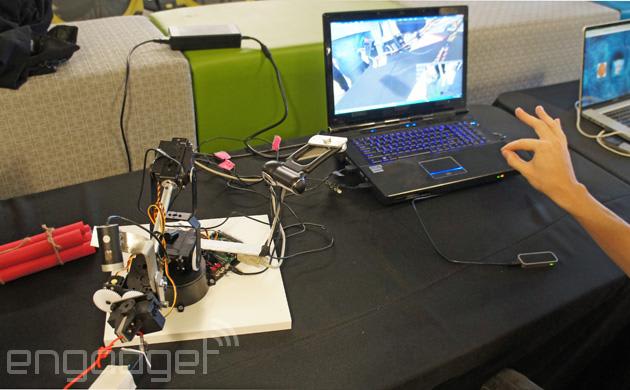 Neutralizing explosives, it turns out, is a delicate and complicated procedure -- but a company called Mirror Training hopes to make it simpler. "Our company has built an interface that literally uses your own hand and arm to move a robotic arm," announced CEO Liz Alessi. "I like to call it 'wear your robot.'" The interface uses a Leap Motion controller to detect an arm and hand movements, allowing a bomb squad robot to directly mirror its operator's actions. In tests, Alessi says, it has allowed operators to disarm mock-bombs twice as fast as traditional control methods.

The team showed off a prototype at a recent Leap AXLR8R event; the demo rig is a little rough around the edges, but it clearly works. The arm follows Leap-detected movement with a slight, but acceptable amount of lag, and picking up and moving objects is fairly intuitive. The demo arm was also equipped with a camera, giving users a first-person view of the action, overlaid on a nearby laptop with a virtual hand. It's an easy to use and natural control method. Best of all, it's plug and play: Alessi says the the system was built to existing standards, and should be compatible any existing military arm and anything built in the near future.

In this article: AXLR8R, bombs, bombsquad, leap, leapaxlr8r, leapmotion, motioncontrol, robot, robotarm, robotarms
All products recommended by Engadget are selected by our editorial team, independent of our parent company. Some of our stories include affiliate links. If you buy something through one of these links, we may earn an affiliate commission.