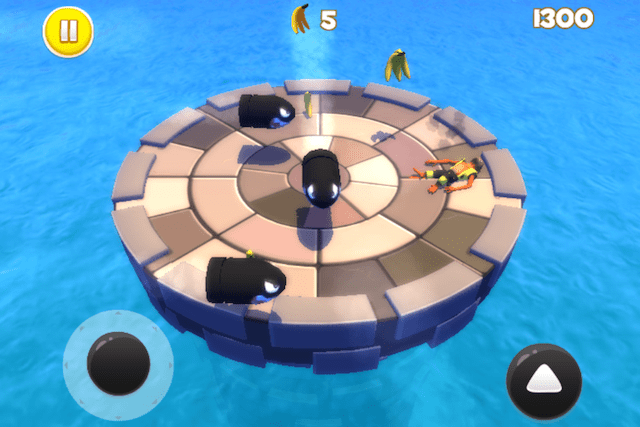 If you thought Flappy Bird was ripping off Super Mario Brothers, you're going to throw your iPhone down in rage when you play Zodiac Dodge. The game's premise is simple, but well executed; users control a monkey across a circular 3D isometric board. Your job is to grab as many bananas as possible before a swarm of bullets gun you down. For the sake of accuracy, lets call these bullets "Bill."

The action comes fast and furious, with the average game time lasting just a few seconds until you get the hang of things. Even then my best time was only around one minute of playing. What's frustrating is I can't blame my low score on cruddy controls. Moving is tight and responsive. I'm just awful at dodging this hail of living bullets.

While its difficultly is punishing, the addition of health power-ups keeps Zodiac Dodge from feeling unfair. There are even handy clocks that pop up from time to time that slow down the pace of the bullets. "Bullet time" if you will. Of course they wouldn't call it that and risk copyright infringement, so they've called it Matrix instead.

Obviously there are other players who are mastering the game. Thanks to the included leaderboards I know there's at least one person out there who has managed to score 59,800 points. With such simple game play mechanics it would be easy to write this one off as a quick burner game, but then you discover the game's included achievements and get sucked right back in. Currently there are only 10 achievements to be unlocked, but if developer Maple Syrup Games is smart they'll add more in a future update.

Zodiac Dodge is a great choice for your kid's iPod touch before a long car trip. The bright graphics are colorful and its platforming action has the charm of a brutal arcade classic. The latest update introduced a graphics upgrade, so it seems like the developers are committed to improvement. I'm still trying to figure out what the zodiac has to do with the title, but it doesn't really matter. There's a monkey out there that needs my help dodging bullets. Until he's safe, the stars can wait.

You can find Zodiac Dodge right now for free in the iTunes Store.

In this article: games, ios games, iphone, monkeys, review, reviews, software, zodiac
All products recommended by Engadget are selected by our editorial team, independent of our parent company. Some of our stories include affiliate links. If you buy something through one of these links, we may earn an affiliate commission.