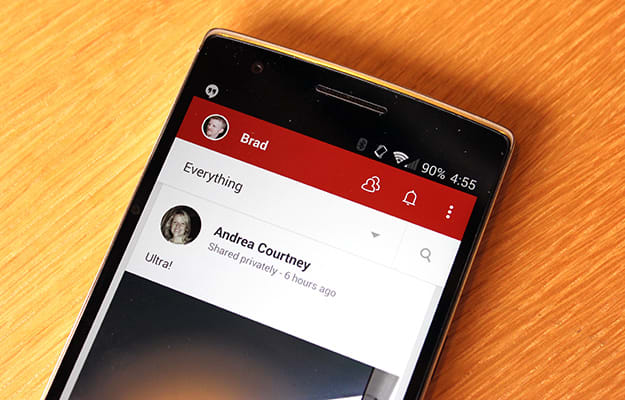 Google+ loyalists, your time has come. Your social network of choice already has automatic photo journals, and now its Android app has gotten a hefty makeover to go with it. The update rolled out within the past few days -- it's aimed at making the G+ mobile experience simple, flatter and faster... especially if you're working with a bigger screen.

It's no secret Google's been trying on new looks for the G+ Android app, and the splashes of red and the floating pencil icon that lets you quickly craft updates were carried over from a leaked version spotted last month. Alas, the navigation bar that used to live along the bottom of the app is gone, while a revamped navigation menu provides fast access to your accounts and circles. The shift is reminiscent of what Google's already done with its new Docs and Sheets apps, but that doesn't mean the new look doesn't have its detractors. That once-beloved navigation drawer that pulled out from the left side is gone -- even while it lives on in other Google apps -- and some aren't thrilled with the lack of translucent menu bards. To each their own, right? With Google I/O right around the corner, we have to wonder if Google will encourage even more design changes that'll impact developers and users alike. The sheer number of leaks means our money's on "yes," but we'll all find out together soon enough.

Source: Google+ (Google Play)
In this article: android, google, googleplus, mobilepostcross, update
All products recommended by Engadget are selected by our editorial team, independent of our parent company. Some of our stories include affiliate links. If you buy something through one of these links, we may earn an affiliate commission.