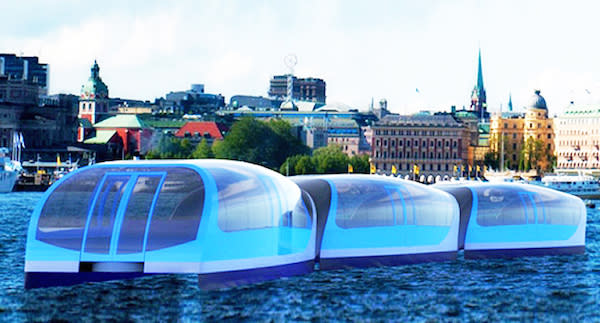 Clean tech fans were thrilled this week when Germany proved it's possible to power the world with greener energy by announcing that 74 percent of its energy was recently met with renewable sources. But if you still have doubts about the future of renewable energy, a new report from the International Energy Agency predicts that solar energy could become the biggest generator of electricity worldwide by 2050 if the right policies are put in place. Meanwhile in Baltimore, they are using solar energy to help tackle pollution. The new solar-powered Water Wheel Trash Interceptor is ready to pull a whopping 50,000 pounds out of the water, which the city hopes will make its harbor swimmable again. In developing countries that lack access to any kind of fossil fuels, this solar-powered pump is helping to produce clean, drinkable water.

In transportation news, Sweden recently proposed adding Water Buses to its residents' public transportation options -- wouldn't that be an awesome way to commute? Indianapolis recently became home to the country's largest electric car-sharing program, patterned after the very successful Autolib' in Paris. Lucky residents of Brooklyn got a chance to test drive the world's first electric wooden bicycle. Featuring sustainably harvested wood and a powerful electric motor, it's the most beautiful way to avoid car traffic we've ever seen. Speaking of traffic, a city in Sweden recently announced plans to give residents free bikes as a way to help reduce the number of cars on the road. Some people still think electric motors and high performance remain mutually exclusive, but that stereotype won't last for long with the Lightning LS-218 on the road. With a 200-horsepower electric motor and a top speed of 216 MPH, this superbike is not just the world's fastest production electric motorcycle, but it also holds the world land speed record as the fastest production motorcycle period. The only thing that might beat it is a hybrid Batmobile.

It's a busy time of year for the world's designers. Hundreds converged in New York recently to showcase their innovations, including interesting new developments in energy-efficient lighting, like these incredible pendant lamps and chandeliers made from OLEDs (Organic Light-Emitting Diodes). While some designers experiment with new materials, such as in this lamp grown entirely from mushrooms, others are looking for the perfect lighting technology. This mesmerizing moon lamp from Raw Studio shines a light on new LED technology that is just as warm as the phased-out incandescents. Nature and technology play well together in this self-cleaning fish tank that also grows delicious herbs, and these magnetic ruler blocks from student Carlos Ng are sure to unleash your inner architect. Sometimes it's the purely conceptual designs that catch our attention -- like this creepy, but fascinating, anatomical Barbie that shows what this oddly shaped doll's anatomy would look like if she were real.

With summer right around the corner, SMS addicts will be excited to learn about the GroupMe app that lets you chat with a whole group of people at a time (for free) and these affordable SmileSolar watches from Q&Q that only need one hour in the sun to pump out three months of battery. Lots of people will be spending more time outdoors and exposing their skin to the sun. This drinkable sunscreen claims to protect your skin from the inside out and these solar-powered sunglasses will alert you if you try to leave them behind. Nice weather means more bike rides, too. Keep your two-wheel steed safe with this solar-powered bike lock of the future while you work on your abs at this free outdoor gym that popped up on the East River Waterfront Esplanade. These mouth-watering vegan BBQ dishes are sure to be a hit at any summer soiree, and California's State Mascot can show you how to save energy when the weather gets hot. Can't get outside? These gorgeous beach ball lamps bring summer fun to any space.

In this article: eco friendly, environment, green, inhabitat, science, transportation
All products recommended by Engadget are selected by our editorial team, independent of our parent company. Some of our stories include affiliate links. If you buy something through one of these links, we may earn an affiliate commission.