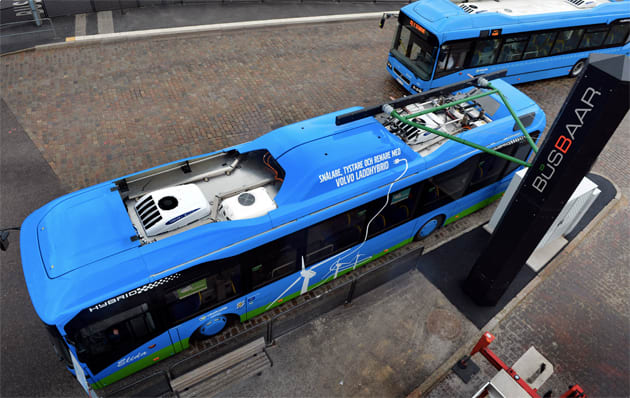 Not content with its energy-sipping plug in hybrid buses, energy-friendly Gothenburg, the Volvo Group and Swedish Transport Administration have announced grand plans to hopefully augment its Hyper Bus fleet with inductive charging. Hyper Bus, or Hybrid and Plug-in Extended Range Bus system, recharges its power supply with a quick charging rig that takes only five to eight minutes to top up power at the end of the line. This quick charge enables the bus to run most of its route on electric power alone because it doesn't need to stop for hours to juice up. One-upping itself, the program is now looking at creating a test route dubbed: ElectriCity -- clever, right? -- which will feature a 300 to 500 meter (roughly 1000 to 1500 feet) inductive charging pathway. Aimed at replacing those quick charging stations, the test route will zap the bus' power source wirelessly while it's in motion. The group hopes to have a system up and running in central Gothenburg sometime in mid-2015. Bonus? If your stop happens to be near the wireless charging area, someday laying a phone down on the road could help boost your battery life -- or melt the handset -- while you wait.

Via: Autoblog
Source: Volvo Group
In this article: inductive charging, volvo, wireless charging
All products recommended by Engadget are selected by our editorial team, independent of our parent company. Some of our stories include affiliate links. If you buy something through one of these links, we may earn an affiliate commission.