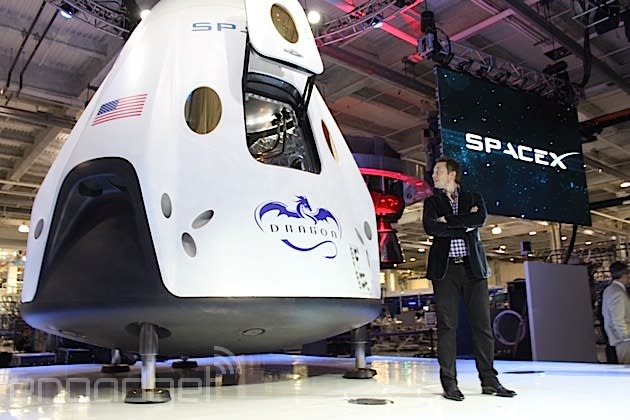 SpaceX's Dragon capsule has been taking cargo to the International Space Station since 2012, but it's done so lacking the chops to shuttle humans into orbit. The firm's just unveiled the next generation of the spacecraft, dubbed Dragon V2, to remedy that, and it's designed to do much more than carry people. The new craft is reusable, can hold up to seven passengers and is designed to allow for swapping crew space for additional cargo. What's more, the vessel is able to land on solid ground with the accuracy of a helicopter -- as opposed to splashing down at sea -- without parachutes. Using eight SuperDraco thrusters, engines 3D-printed from a superalloy, the Dragon V2 can blast out enough force (16,000 lbf for each engine) to slow itself down for a landing on terra firma. According to SpaceX CEO Elon Musk, Dragon V2 will make its first voyage with humans by the end of 2016. In the meantime, the capsule and its engines still have to undergo more testing. Once its making regular flights, Musk expects the capsule to endure 10 launches without major refurbishing. When its past that threshold, it's likely that only its heat shield will need servicing. Presumably, once the shield is repaired, the craft can endure another 10 trips before needing another major tune-up.

In the event of an emergency during launch, Dragon V2 can use its SuperDraco engines to abort at any time during its ascent. Typically, that kind of escape option is only available during the first few minutes of flight. When it comes to mishaps while landing, Musk's new vessel can land itself even if two of its thrusters aren't operating. If an engine-driven touchdown is out of the question, the capsule can rely on parachutes to slow it down for an ocean splashdown.

So, how much will a launch for NASA or other customers cost? As low as $20 million. According to Musk, the new Dragon is part of SpaceX's goal to make spaceflight so affordable that there are hundreds -- and eventually thousands -- of craft hurtling towards space every day. If you want a private trip, you'll have to start saving pennies.

In this article: capsule, Dragon, DragonCapsule, DragonV2, ElonMusk, manned, space, spacecraft, SpaceX, SuperDraco, video
All products recommended by Engadget are selected by our editorial team, independent of our parent company. Some of our stories include affiliate links. If you buy something through one of these links, we may earn an affiliate commission.