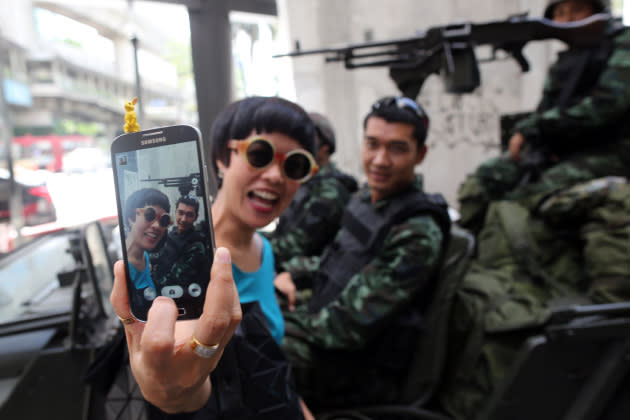 Foreign governments have been blocking Twitter and Facebook off and on for years, and now Thailand's responsible for some social service downtime. The country's Information Communications Technology (ICT) Ministry disabled access at the military's request, taking the site offline for about 30 minutes yesterday afternoon. According to a Reuters report, Surachai Srisaracam, an ICT official, said the action was intended to "thwart the spread of online criticism of the military" following the recent coup. The official added that the government planned to meet with other social sites, such as Instagram and Twitter, "to ask for cooperation from them." Meanwhile, many Thai citizens are using sharing sites for more innocuous purposes, such as posting selfies with soldiers, which they are once again free to do.

Update, May 30th: That meeting between social networks and the Thai military? Guess what. No one showed up.

In this article: block, blocked, coup, facebook, goverment, military, political, politics, social, socialmedia, thailand
All products recommended by Engadget are selected by our editorial team, independent of our parent company. Some of our stories include affiliate links. If you buy something through one of these links, we may earn an affiliate commission.