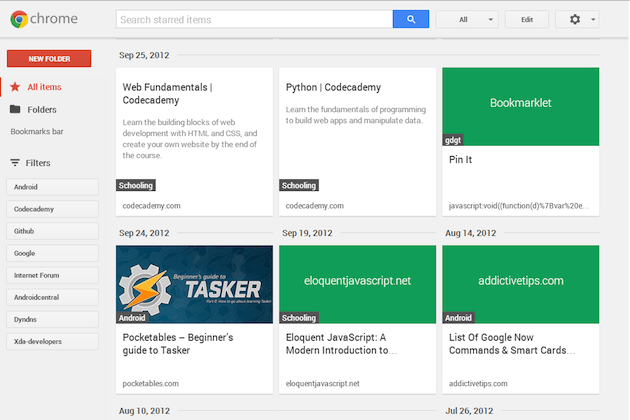 Google's Stars bookmarking app showed up ever so briefly on the Chrome Web Store, and then disappeared again. The app, which was leaked early this month, seems to allow you to "star" web pages from Chrome's address bar. You'd then be able to organize them by folder and search them for content, with the results displayed in an "image-rich grid" as seen in the screencap above. Indeed, the app description in the store read: "Google Stars is the platform where everything you're already indicating interest in is saved. Initially, these will include your Chrome bookmarks, More integrations to come!" However, this particular release seems to be an accidental leak of the internal version, as it says "Thanks for dogfooding Google Stars" when we installed it. At this time, it looks as if the app has been pulled from the store. We've reached out to Google to find out more about what happened here, but it does seem like Stars could be close enough to final release if it's getting leaked out to the public.

Update: Google gave us the following statement regarding the Stars app: "We're always experimenting with new features, but have nothing new to announce at this time."

In this article: bookmarking, chrome, chromewebstore, google, googlestars, stars
All products recommended by Engadget are selected by our editorial team, independent of our parent company. Some of our stories include affiliate links. If you buy something through one of these links, we may earn an affiliate commission.