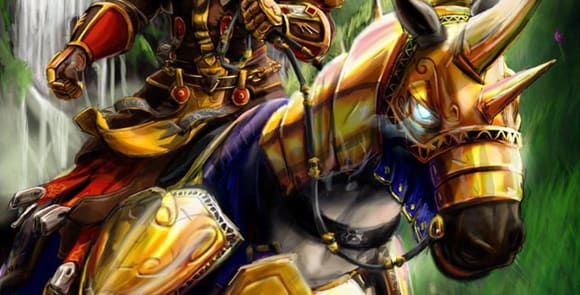 The steed of a paladin isn't your typical mount. Unlike the early mounts of vanilla, it never existed as a physical object -- it was a spell cast by the paladin that summoned the steed from nowhere. In later years, it has since joined the rest of Warcraft's steeds on the mount tab, but for the longest time, the charger could only be found in the paladin's spellbook. This was no ordinary mount -- and its origins were also far from ordinary. While blood elves, draenei, and tauren were later introduced and given unique mounts of their own, in the original game the paladin class and its unique steed were only available to humans and dwarves.

Unfortunately, the days of tracking down and compiling the elusive materials needed to harness a charger have disappeared since the release of Cataclysm, which saw both the quest chain for the Alliance, as well as the chain introduced for the Horde, removed in patch 4.0.1. But although the paladin's charger can now simply be learned at the appropriate level, there was a time where obtaining that steed was a much more difficult task, one with a unique and interesting tale behind it. As is only appropriate for a paladin, it's a tale of Light lost, a tale of redemption and hope.

The steed of the paladin wasn't just your usual horse with an ornate saddle. It was a creature summoned with the Light, a formerly dark and corrupt steed that had been purified and redeemed. In vanilla, when a paladin reached level 60, they were sent to Lord Grayson Shadowbreaker in Stormwind for more information on obtaining their charger. This wasn't a reward for good deeds sown -- this was a challenge that the paladin had proved themselves worthy of accepting over the course of leveling.

And in a way, it was the ultimate test for a would-be paladin to complete. Paladins dedicate their lives to ridding the world of evil and darkness. Obtaining the charger involved just that -- rescuing a would-be companion from the forces of evil and corruption, and bringing it to the Light. In a way, obtaining the charger was the culmination of every lesson the paladin had been taught over the course of their journey.

In another way, the task itself served as a warning, because the steed that would be the paladin's charger was the steed of a death knight known only as Darkreaver. Once a noble paladin, he had been seduced by the call of the Lich King and fell into darkness, taking his steed with him. Corrupted, twisted, and bearing none of the Light's grace that he wielded in his life, Darkreaver traveled to the dark halls of Scholomance, where he set up shop in the Great Ossuary and promptly set to twisting the spirit realm into doing his dark bidding.

Darkreaver was not only a death knight, he was the end result of a paladin that had fallen from grace. A chilling, grim reminder of what could happen to any paladin who deviated from the Light and fell instead to corruption and evil.

But defeating Darkreaver wasn't just a matter of popping into Scholomance and swatting the death knight with a sword -- the dark spirits needed to be exorcised in order to set them at rest. Paladins who wished to test their mettle against the death knight had to first prove that they had the skill to do so -- and that they were willing to undertake anything in order to complete the task. To that end, sacrifices needed to be made.

This wasn't a sacrifice of blood -- it was a hit to the pocketbook and a test of charity wrapped into one. To perform the exorcism, the censer of dwarven High Priest Rohan was needed, and he was not about to let it go for nothing. Paladins had to make a donation of 150 gold to use the censer -- enough to construct a new censer, and help feed the poor as well. Yet while the censer may have been a powerful item, it still had to be thoroughly tested before it could be used in Scholomance -- and the paladin required further testing as well.

Although paladins that had obtained the censer had demonstrated they were willing to sacrifice to accomplish what was good and just, they also needed to show the vim and zeal required to pass judgment on the evil spirits that haunted the world, and lay them to rest. Paladins were sent to the Eastern Kingdoms to accomplish this -- the Scourge was still very much out in force, and the haunted region known as Terrordale required a great deal of cleansing. Those that braved Terrordale and proved themselves masters of both sacrifice and judgment were indeed worthy of facing Darkreaver -- but his steed was another task altogether. 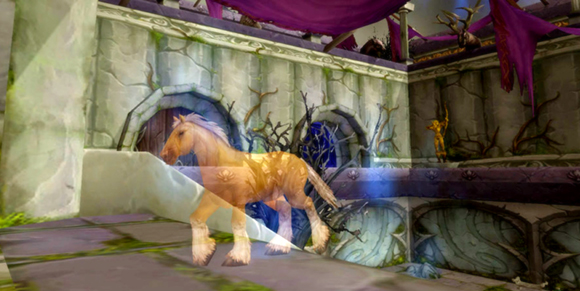 A paladin's charger is not just a cleansed spirit that has been subdued -- it's a spirit, a force to be reckoned with. Such a steed requires proper barding that has been attuned to the spirit realm. Needless to say, crafting such a thing wasn't an easy task, nor was it an inexpensive task. Arcanite and runecloth were required for the lining and plating, Arthas' Tears to attune the materials to the spirit realm, and Stratholme holy water for the spiritual imbuement necessary to make the creation work. Oh, and gold. A lot of gold. Spiritual barding isn't exactly inexpensive to create.

Beyond that, it also require the blessing of an ancient equine spirit being held by a corrupt treant in Dire Maul. The equine spirit not only needed to be freed, but soothed with special horse feed found only in Southshore -- created by a woman named Merideth Carlson, who wasn't exactly happy with the paladins of the Silver Hand. They mocked her for her claims that she could make a feed for the spiritual horses, and yet once it had been proven as fact, all paladins had to come to her to have the feed crafted. Once paid for her time and talents, Merideth seemed to calm a little, pleased that at least one paladin was willing to take her seriously and pay her fee.

The paladin then had to travel to Dire Maul, feed in hand and prepared to face down and judge Tendris Warpwood, freeing the Ancient Equine Spirit from its bindings, feeding it to soothe the creature, then placing the binding upon its back in order to receive its blessing. Even today, players that defeat Tendris in Dire Maul can still catch a glimpse of the spirit after the corrupted treant has fallen -- although without feed and without barding, the spirit does little more than walk away. 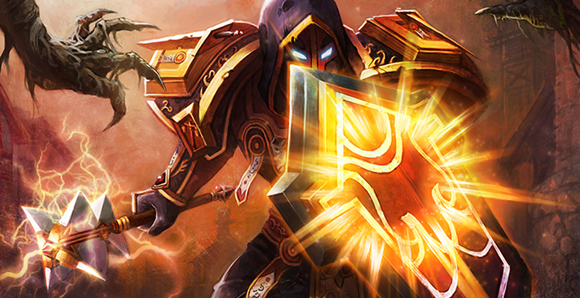 With barding and censer in hand, it was nearly time to make way to Scholomance -- yet some modifications to the censer were required before the journey could be made. A divination scryer needed to be crafted to pierce the shadows in the Great Ossuary of Scholomance and bring forth the evil spirits to be judged -- the last, the soul of Darkreaver's long-dead charger, now bound in darkness to its twisted master.

Two diamonds needed to be combined with the censer -- an Azerothian Diamond, and a Pristine Black Diamond -- and then it was time for the ritual to take place. After ridding the Great Ossuary of Rattlegore and the rest of the skeletal constructs, the scryer called forth the evil spirits that Death Knight Darkreaver held under his thrall. One by one the spirits were judged and sent to their rest, until Darkreaver himself came to face the paladin.

And once Darkreaver fell, the only thing left was the mournful spirit of his long-dead charger, waiting to see how its soul had been judged. Returning the soul to charger not only redeemed the beast, but bound it to the paladin in eternal, grateful servitude, to stand by the paladin's side as noble steed of the Light once more.

This wasn't an easy task for paladins at level 60 to accomplish, not by a long shot. The total cost in gold was close to 355 gold, and in vanilla, gold was not easy to come by at all. This didn't include the materials also needed to complete the task -- Arcanite Bars were notoriously expensive, as were the required diamonds. In order to obtain the required Stratholme Holy Water, paladins had to head to the dead side of Stratholme, where crates of the stuff could be found littering the streets alongside trash packs. To defeat Tendris Warpwood, not to mention Darkreaver, a full group was required -- there was no soloing this task.

And this was all before the advent of the dungeon finder tool. Players had to assemble their own groups to complete the tasks assigned. It was a monumental undertaking for a level 60 paladin, but the reward was a unique steed like none other -- a redeemed soul that had almost lost all hope, now forever bound in gratitude and devotion to the paladin that judged it worth of redemption and freedom.

Although the storyline may have been removed, the paladin's charger is still a creature that outshines mere mortal mounts. Glittering with the golden glow of Light itself, chargers aren't just animals to be ridden or used as beasts of burden. They are the physical representation of those three virtues those that practice the Light hold dearest above all else: a diligent respect for the spirits of the damned and a wish to see their grace restored, the tenacity to press on against all odds and sacrifice what is needed to accomplish these goals, and the compassion to see the potential for glory in even the most ignoble of creatures -- the Light's grace reflected in soulful eyes, and the ringing of golden hooves.

While you don't need to have played the previous Warcraft games to enjoy World of Warcraft, a little history goes a long way toward making the game a lot more fun. Dig into even more of the lore and history behind the World of Warcraft in WoW Insider's Guide to Warcraft Lore.
In this article: dire-maul, dwarf, featured, guide, guide-to-lore, human, lore, lore-guide, paladin, paladin-charger, paladin-mount, role-play, role-playing-guide, rp-guide, scholomance, stratholme, vanilla-WoW, world-of-warcraft-lore, wow-guide, wow-lore, wow-role-playing, wow-role-playing-guide, wow-rp, wow-rp-guide, wow-rping
All products recommended by Engadget are selected by our editorial team, independent of our parent company. Some of our stories include affiliate links. If you buy something through one of these links, we may earn an affiliate commission.