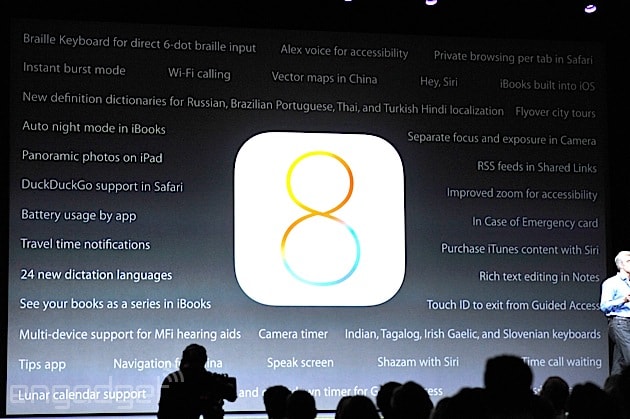 Widgets! QuickType keyboard! Hey, Siri! Interactive notifications! Like most new versions of Apple's mobile OS, iOS 8 comes with its fair share of features that, in theory, will help improve the experience from the previous version. Our list of new features covers nearly every highlight from Apple SVP Craig Federighi's presentation, but every year there's always one slide filled with additional enhancements the company doesn't have enough time to call out individually on stage, and every year that slide disappears within a few seconds. So, what else will iOS 8 offer that wasn't specifically called out by Hair Force One?

Admittedly, there's a reason why the majority of these features only get a few seconds of precious keynote time: A lot of them simply aren't that interesting to the average end user. New languages and refined dictionaries, for instance. There are, however, quite a few gems that are worth paying a little more attention to, and even a few that may not be fully explained until consumers get their hands on the OS for themselves.

First, we already wrote about support for WiFi calling, a feature T-Mobile currently touts on most of the Android devices and Windows Phones it carries. This service, which gives you the ability to use WiFi networks to make calls, is extremely handy when you're in an area with spotty cellular coverage, but more-than-capable WiFi signal.

If you've used an iPhone in the past, you likely have found yourself frustrated by unexplained battery drain. Is a rogue app sucking your battery dry? Who knows? Fortunately, Apple appears to have heard your cries of annoyance, as it's introduced battery usage by app; now you can go into the settings menu and find out which apps are a significant power drain on your device.

Privacy fans will like this one: iOS 8 will list DuckDuckGo as a default search option in Safari, in addition to Google, Bing and Yahoo. We won't blame you if you haven't heard of the search engine before -- essentially, its whole reason for being is to not track your searches. You won't have to worry about your interests or other information getting sent to advertisers, for instance.

iOS 8 will also offer a few new enhancements to the camera app: Separate focus and exposure controls, as well as instant burst mode and a camera timer. Apple's preferred to keep its camera app as simple as possible, so this is certainly adding a layer of complexity that wasn't there before.

And here's one for the iPad users: Panoramic mode. Its absence in iOS 7 was a bit of a head-scratcher, but Apple has finally determined that there are plenty of people out there who actually do use their tablets to take photos. Why not make the best of the experience by adding in the ability to take panoramic shots?

Also on the list of iOS 8 features is FaceTime call waiting. It's a nice enhancement if you use the video chat service on a regular basis, since there's always a possibility that someone else wants to set up a FaceTime call with you at the same time.

Finally, given the huge push Apple's making in China -- it landed a deal with China Mobile, the largest carrier in the country, earlier this year -- it makes sense to offer more local support. Namely, iOS 8 adds lunar calendar, navigation and vector map support for Chinese users.

Naturally, this isn't the full list: iOS 8 users will also enjoy things like multi-device support for made-for-iPhone hearing aids, the ability to purchase iTunes content using Siri, travel time notifications, rich text editing in the Notes app, flyover city tours, built-in iBooks support and braille keyboard support for direct six-dot input. Of course, there may be other stuff added in between now and the final public release, but we'll have to wait for the fall to know what else will make the cut.

In this article: apple, appleios, ios, ios8, mobilepostcross, newfeatures, wwdc, wwdc14, wwdc2014
All products recommended by Engadget are selected by our editorial team, independent of our parent company. Some of our stories include affiliate links. If you buy something through one of these links, we may earn an affiliate commission.