SiME Google Glass knock-off is held together with Scotch Tape 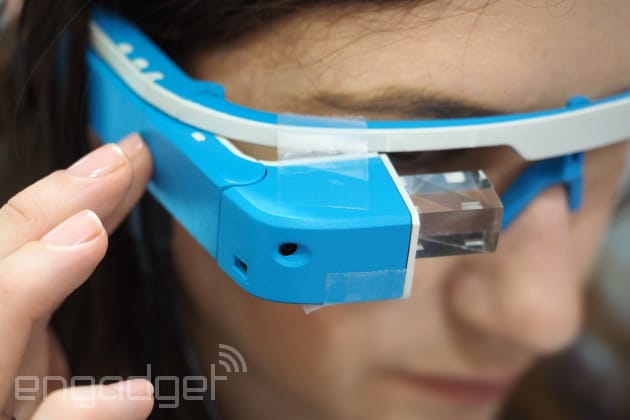 It's not exactly a good sign when your product's being held together with Scotch Tape. But that's actually one of the main points of distinction between the SiME Smart Glass and Google's version of the wearable -- that and a much lower price point, of course. Taiwanese company ChipSip hopes to sell its Google Glass knock-off for $500, and though that seems palatable compared to $1,500, it's still not cheap. That price is even harder to swallow when you see just how complicated it is to use, as we discovered on the Computex show floor.

The heads-up display runs Android 4.2.2, and the touchpad on the right side of the device makes for a very finicky user experience. Selecting apps and moving the cursor around takes a ton of effort. There's no voice functionality, either, so you can't say "Okay, SiME" to make things easier (how would you pronounce that, anyway?). As for the display itself, the 720p screen looked decent, but the frame was too big for my head, which made it hard to get a steady image.

Unlike Glass, which has its own custom interface, SiME uses stock Android, which was more than a bit clunky to navigate. You have a standard app tray and all of the apps you'd expect to find on a smartphone -- where they're actually meant to be used. Externally, the display looks nearly identical to Google's equivalent, but the projected image wasn't easy to see, effectively making this iteration unusable. Ultimately, we're not confident that this wearable will ever be a perfect fit, but either way, ChipSip has a long way to go before SiME's ready for consumers.

In this article: ChipSip, glass, google, googleglass, hands-on, HeadMountedDisplay, HeadMountedDisplays, hmd, sime, wearable
All products recommended by Engadget are selected by our editorial team, independent of our parent company. Some of our stories include affiliate links. If you buy something through one of these links, we may earn an affiliate commission.