Acer's latest Chromebooks are built to survive the classroom 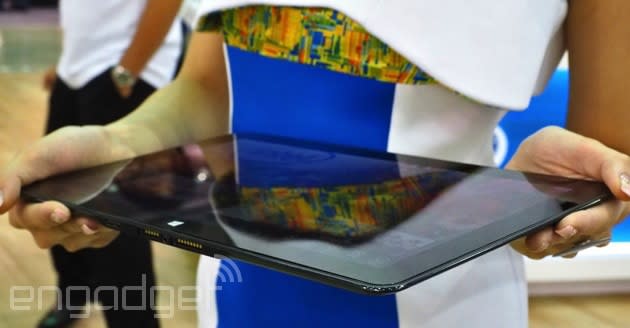 It's OK if you're not a chip geek: All you need to know is that Intel's 7.2mm-thick reference PC was the most important thing we saw this week at Computex. Designed for 2-in-1s, the company's Core M-series processors will usher in full-fledged computers that are even skinnier than the iPad Air. Exciting, right? Seriously -- and maybe you just have to see for yourself -- these things are impressive. Futuristic, even. Given that, then, we would have assumed they'd hit the market later this year with steep prices in tow. After all, aren't we used to paying a premium for thin?

In fact, Intel has confirmed to us that these devices will cost far less than typical Ultrabooks, which are already ridiculously skinny. In particular, Intel's PC client chief Kirk Skaugen says prices could dip as low as six hundred dollars, putting them on par with mid-range PCs. "[Core M 2 PCs] will be aggressively priced over premium tablets," he said in an interview, referring to competing devices like the iPad. He added, however, that for a 2-in-1 to be that cheap, it would have to be slightly thicker than the "Llama Mountain" reference PC we told you about earlier; that kind of machine might cost closer to $799. "I think Llama Mountain could deliver $799 kind of price points," he added. "Maybe they go a little thicker, but they'd still be fanless and hit $599, $699."

Accordingly, performance will fall short of a typical Ultrabook with a Core i5 or i7 processor, though it should still be an improvement over Intel's "Bay Trail" chips, found in many of today's 2-in-1s. Beyond that, Intel isn't making any specific claims, other than hinting at longer battery life (which would make sense, given the lower TDP). Whatever the performance is, though, we suspect it'll be good enough for mainstream users -- especially at this price.

In this article: broadwell, computex2014, core m, corem, intel, intel core m, intelcorem, kirk skaugen, kirkskaugen
All products recommended by Engadget are selected by our editorial team, independent of our parent company. Some of our stories include affiliate links. If you buy something through one of these links, we may earn an affiliate commission.