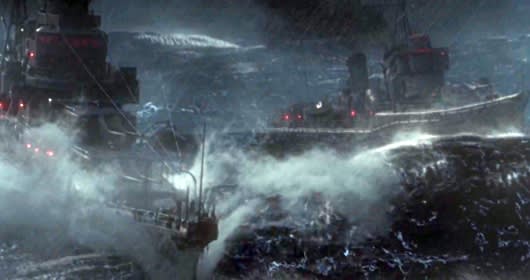 Between World of Warplanes and World of Tanks, Wargaming.net has your need for mechanized warfare covered. Almost, anyway. Sure, you can shoot at other planes and other tanks, but how are you going to also blow up a whole lot of boats? You can't... until World of Warships comes out, anyway. Then you can blow up war machines pretty much anywhere you want.

So when is it coming out? That's still something of a secret, but it's obvious that World of Warships is the next game to get a big push from the studio, starting with this year's E3 trailer embedded just past the break. While the trailer doesn't include any in-game footage, it does give you a clear picture of what you'll be doing in the game -- shooting at boats from other boats. Actually, you probably could have guessed that one without the trailer.

Source: Official Site
Coverage: Official Site
In this article: boats, e3-trailer, f2p, free-to-play, historical, im-on-a-boat, news, news-items, pvp, trailer, trailers, video, videos, war, wargaming.net, warships, world-of-battleships, world-of-warships, wows
All products recommended by Engadget are selected by our editorial team, independent of our parent company. Some of our stories include affiliate links. If you buy something through one of these links, we may earn an affiliate commission.