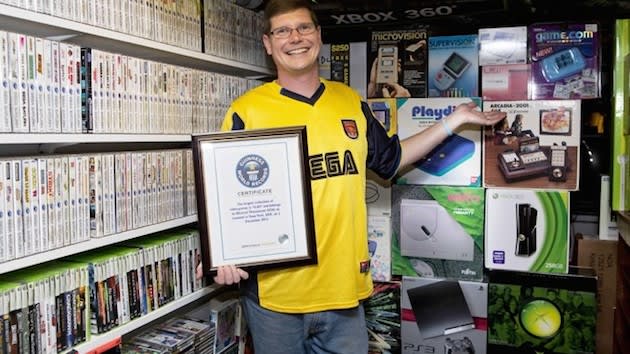 Meet Michael Thomasson. He's a 41-year-old video game historian who holds the Guinness World Record for the largest video game archive. Now he wants someone else to have it. Thomasson admits that he'd rather not sell his 11,000+ game collection, which includes full catalogues for platforms including Dreamcast, Saturn, Virtual Boy and Lynx, but due to family commitments he's decided to offer it up to the highest bidder. It went up on auction site Game Gavel a couple of days ago with a starting bid of $1, and it's already reached $50,000 ahead of the June 15th deadline. If you're dying to become a world record holder and have the necessary space to store it all, the collection is said to be worth somewhere between $700,000 and $800,000. We wonder if he'll accept installments.

Via: Kotaku
Source: Game Gavel
In this article: auction, console, games, guinness, video game, world record
All products recommended by Engadget are selected by our editorial team, independent of our parent company. Some of our stories include affiliate links. If you buy something through one of these links, we may earn an affiliate commission.