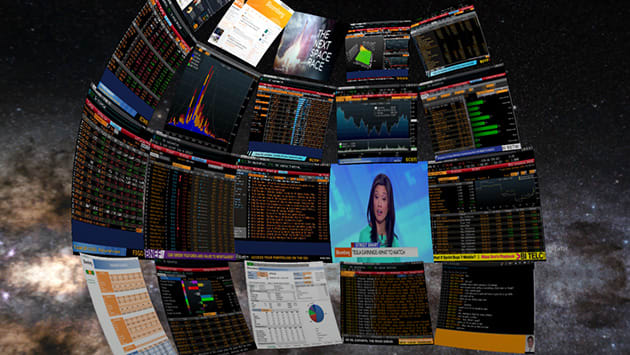 No matter how many screens they add to their setup, traders are limited to a finite amount of display real estate. To solve that problem, Bloomberg LP's turned to the virtual-reality headset Oculus Rift. Don't expect to see a room full of Oculus-equipped traders anytime soon, though; it's just a prototype, albeit one that Bloomberg's showing off at its Next Big Thing Summit this week.

Bloomberg's prototype puts infinite screens before your eyes, allowing you to view as much financial data as you desire. Beyond the obvious benefit of unlimited space, a virtual trading desk would allow for a more mobile workspace (you could take the Oculus home or on the road) and the ability to change screen arrangements based on the time of day. It's unclear whether an Oculus-powered trading desk would cost less than a brick-and-mortar Bloomberg terminal, which costs about $2,000 a month.

Currently, the rig is merely a mockup, with screenshots and videos rather than real-time information. Bloomberg's Nick Peck told Quartz that the proof-of-concept may eventually work with a Leap Motion for gesture control. While the virtual trading terminal is still far from a final product, it's an exciting look at how Oculus Rift -- and virtual reality in general -- could benefit the workplace.

Source: Quartz
In this article: bloomberg, oculus rift, prototype, trading, virtual reality
All products recommended by Engadget are selected by our editorial team, independent of our parent company. Some of our stories include affiliate links. If you buy something through one of these links, we may earn an affiliate commission.