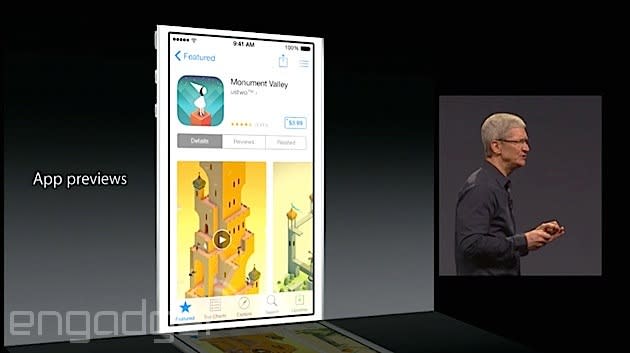 With revamped policies in the iOS 8 App Store, Candy Crush and other apps that reward you for social sharing could soon be booted. Apps that provide users incentives for sharing on social networks aren't the only ones to violate Apple's latest terms and conditions for developers; those that provide in-game credit for watching videos are also under fire, along with apps that promote other apps.

Several developers have received rejections that reflect Apple's new rules, with one individual reporting that a previously approved app was turned down even though he had only added a new skin. According to an Apple rep, his game violated guidelines around in-game credits for watching videos and promoting apps other than one's own. Other developers have received rejection notices for using social sharing as an incentive.

Considering how common these app monetization strategies are, Apple's policies will have a huge effect on developers. Platforms like Tapjoy, which lets you download an app instead of making an in-game payment, will clearly be affected as well. And while the strengthening of Apple's ban hammer will help clear the App Store of the apps made just to earn cash, plenty of legit titles could be squashed as well. It's unclear whether Apple will reinforce its ban retroactively, and -- if so -- how many big-name titles would be pulled.

At WWDC last week, Apple announced several improvements to the App Store in iOS 8, including video previews, developer bundles and a new "Explore" tab for browsing categories and sub-categories of apps. Search is also enhanced, with the ability to see what's trending.

Apple clearly wants these tools to power app discovery rather than developers' cross-promotion and social sharing incentives. Still, the company isn't forbidding devs from promoting their apps in other ways. As an app reviewer told one developer who received a rejection notice: "You can advertise your own games via the standard ad networks. However, when you have a 'More Games' or 'Other Games' you should only market your own games."

In this article: apple
All products recommended by Engadget are selected by our editorial team, independent of our parent company. Some of our stories include affiliate links. If you buy something through one of these links, we may earn an affiliate commission.