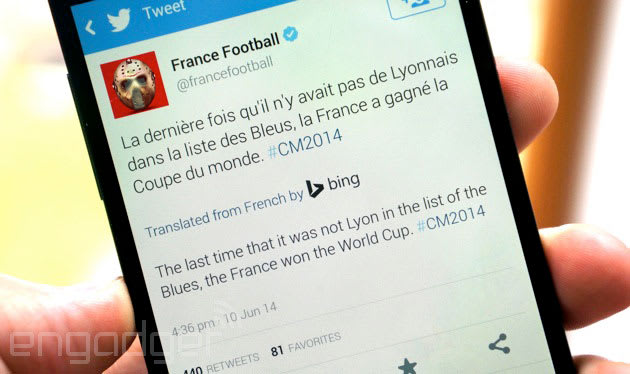 Twitter's been experimenting with Bing's translation services for quite some time, but now it's making it available to more people on a wider range of devices. As spotted by CNET, the company has begun outfitting its iOS app with translation buttons powered by Microsoft's search service. It's also making things clearer on the web by displaying a small globe icon beside tweets that aren't written in English. Results are mixed, as you can see from the image above. Twitter first brought Bing's services to Windows Phone on mobile and has displayed Bing translation tools inside the detailed tweet view on Twitter.com. Today's changes make things easier for users who follow non-English accounts or might see more foreign-language tweets in their stream following the start of the World Cup.

Source: CNET
In this article: bing, ios, microsoft, translation, twitter, web
All products recommended by Engadget are selected by our editorial team, independent of our parent company. Some of our stories include affiliate links. If you buy something through one of these links, we may earn an affiliate commission.