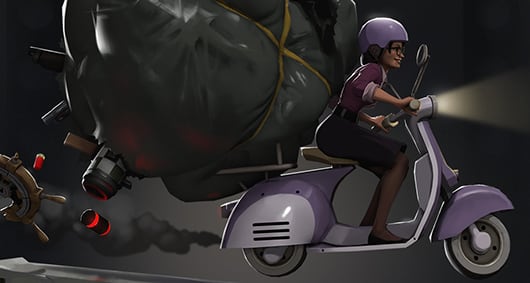 After adding a handful of colorful taunts to its free-to-play shooter, Valve has rolled out a mix of new weapons and items available for Team Fortress 2 as part of its "Love and War" update.

Items featured in today's update include, but are not limited to: The Back Scatter, a scattergun with the ability to minicrit when used on enemies at close range from behind; The Tide Turner, a shield with solid resist bonuses; a parachute for slower descents; a new sniper rifle with the ability to charge shots; and a rocket launcher, which launches rockets according to the instructional manual.

There's also a limited edition item – the breadbox – that players can craft to earn access to a number of gluten-based items featured in Valve's recent TF2 short film, Expiration Date.
Source: Team Fortress 2 Blog
In this article: pc, Team-Fortress-2, valve
All products recommended by Engadget are selected by our editorial team, independent of our parent company. Some of our stories include affiliate links. If you buy something through one of these links, we may earn an affiliate commission.