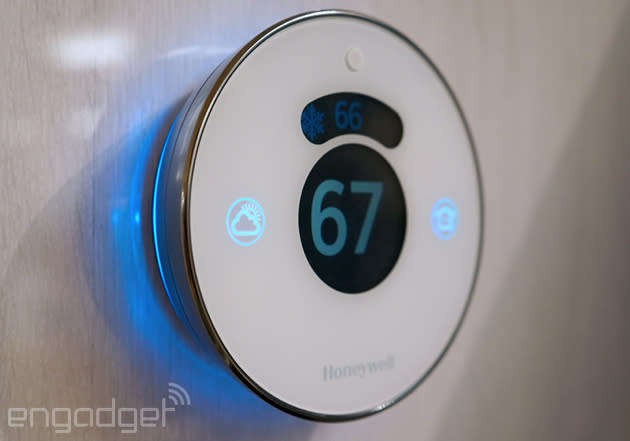 Last week Honeywell announced the Lyric, its answer to the Nest learning thermostat. Today, we got a chance to see the WiFi-connected smart device in person. Retailing for $279 starting in August, the Lyric stands out for its geofencing feature, which uses smartphone location info to know whether you're home -- and to tweak the settings accordingly. When you're away, energy-saving mode is activated, and when you get within seven miles of your house, your preferred temperature will kick in. Honeywell thinks (well, hopes) you'll choose its product over the Nest for this reason, citing both the convenience factor and the energy savings. Looks-wise, at least, the Lyric is a bit more sophisticated than the Nest, with an all-white design that's sleek and understated. The thermostat packs a proximity sensor to recognize when you're nearby, and we saw the screen dim when we stepped away from it as promised. We like the halo of light that flashes orange (heat), blue (air) or green (away mode) to indicate the thermostat's current setting, too. Honeywell's also touting the Fine Tune feature, which factors in humidity levels, along with both indoor and outdoor temperatures, when adjusting your home's climate. We couldn't exactly test that feature out in our short hands-on time at a trade show, but in theory the feature would lower the temperature a few extra degrees to compensate for humidity.

On either side of the main display are buttons, one for viewing a weather forecast for the day and the other for telling the device that you're leaving home. Once you've pressed the "away from home" button, you'll have the opportunity to specify how long you'll be gone so the Lyric can adjust settings accordingly. Naturally, you can change the current temperature and specify settings for recurrent events -- such as bedtime at 11:30 -- via the Lyric app (on Android and iOS) as well.

While we wouldn't say the Lyric is necessarily better than the Nest -- it really depends on your habits, as well as your aesthetic preferences -- the thermostat is a strong contender. That said, $279 is a lot to spend on a thermostat, especially when the well-established competition costs $30 less. In any case, Honeywell's thermostat is just the first product in its new smart-home lineup; when we asked about the Lyric name, a rep told us the idea was "keeping life in tune," implying that the company has a few other smartphone-controlled products on the way.

Jon Turi contributed to this report.

In this article: connected home, green living, hands-on, honeywell, honeywell lyric, nest, smart home, smart thermostat
All products recommended by Engadget are selected by our editorial team, independent of our parent company. Some of our stories include affiliate links. If you buy something through one of these links, we may earn an affiliate commission.