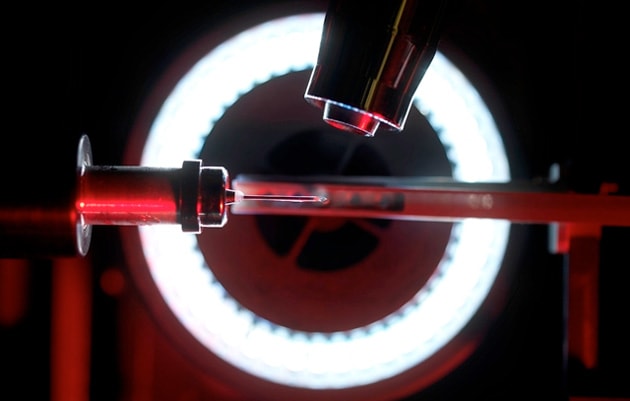 It's been known for a while that bacteria are rapidly becoming immune to the current range of antibiotics humanity has available. That's why it's harder to get hold of pills now than it was a few years ago, simply because if we don't learn to get by without them, we'll probably all die of some hideous mutated strain of MRSA in a few years' time. Rather than simply developing new antibiotics to throw at the problem, however, a team of researchers from the University of East Anglia and the Diamond Light Source in Oxford claims to have discovered a way to undermine a bacteria's ability to develop drug-resistance in the first place -- causing them to wither and die before it even becomes a problem.

It turns out that the reason bugs like Escherichia coli are capable of resisting antibiotics is because they develop a lipid-based outer membrane. Essentially, a defensive wall surrounds the outside of the cell, preventing antibiotics from attacking the vulnerable parts inside. The team found that these walls are created by pushing building blocks (lipopolysaccharides) to the outside along a biological path. If that pathway is blocked, however, the cells begins to weaken, and eventually dies. What's more, because the treatment weakens and disrupts the structure of the bacteria, the team hopes that the bacteria will not "be able to develop drug resistance" against it in the future. Then again, this breakthrough -- if that's really what it is -- is still trapped within the confines of a lab in Norwich, England, so there's a long way to go before immunologists can sit back and relax.

Update: Finer minds than ours have pointed out that, eventually, bacteria will be able to mutate a resistance to this in the same way they do against penicillin.

Via: Motherboard
Source: UEA, Nature
In this article: Antibiotics, Biology, Diamond Light Source, Drug resistant, Medicine, Superbugs, UEA, University of East Anglia
All products recommended by Engadget are selected by our editorial team, independent of our parent company. Some of our stories include affiliate links. If you buy something through one of these links, we may earn an affiliate commission.