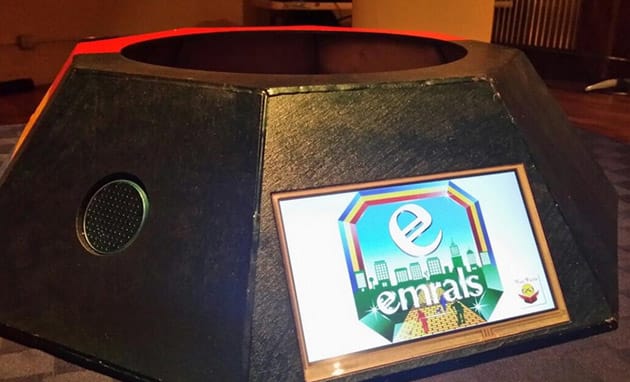 If you ask us what our idea of a high-tech trash can is, we'd tell you it's one with a built-in compactor powered by solar panels. Sean Auriti from Brooklyn, however, had other ideas, which ultimately led to Ecan -- a garbage bin that earns you money (in cryptocurrency, that is) whenever you toss anything in. Unlike our rather simplistic vision of a modern trash can, Ecan requires anyone who wants to use it to identify themselves on a Raspberry Pi-powered screen that uses solar energy to run. That's not all, though: you also need to scan the barcode or anything you want to throw, unless it's anything without one, like a banana peel or a candy wrapper. In that case, you'll have to take its picture using the bin's accompanying app before it starts mining Emrals (what Auriti calls the cryptocurrency he created for this purpose) for you.

If you're in a hurry, you can also just take pictures of trash littering the ground, assign them corresponding values on the app and let others user throw them into the Ecan for rewards. Clearly, it'll take a lot of dedication on your part to use it when there are other bins around that'll let you toss and go. Auriti, however, has faith in his invention and believes there's a chance for Ecan to go global, giving people access to free WiFi and earning them Emrals at the same time. Should you want to see if Ecan's really as ridiculous or as innovative (you tell us) as it sounds, you can check it out in person at the ongoing New York City Electronics Week.

We presented our interactive trash can at #WVNYC today. Everyone loved it! pic.twitter.com/iFqlkyAwQt

Via: Motherboard
Source: Emrals
In this article: ecan, emrals, SolarPowered, TrashCan
All products recommended by Engadget are selected by our editorial team, independent of our parent company. Some of our stories include affiliate links. If you buy something through one of these links, we may earn an affiliate commission.