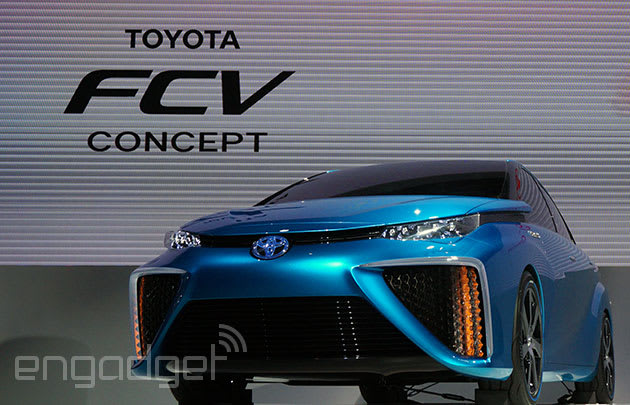 Toyota might be bringing a commercial hydrogen fuel cell car to roads in 2015, but the fuel still has a few drawbacks -- the major ones being storing and transporting the gas itself. Research from the UK's Science and Technology Facilities Council (STFC) reckons they can solve it using ammonia, which is more secure and less volatile, as the hydrogen delivery method. "Cracking" ammonia offers up one part nitrogen and three parts hydrogen and while the catalysts that do this are typically pricey precious metals, this new research uses two chemical processes at the same time, offering the same results at a much lower cost. According to the research team leader, Professor Bill David: "Our approach is as effective as the best current catalysts but the active material, sodium amide, costs pennies to produce. We can produce hydrogen from ammonia 'on demand' effectively and affordably."

Storage-wise, Ammonia can be housed at low pressure in plastic tanks, while any hypotheical tanks would use the same structure as LPG. "We've even thought about how we can make ammonia as safe as possible and stop the release of NOx gases," (the byproduct of cracking) added Professor David. "While our process is not yet optimized, we estimate that an ammonia decomposition reactor no bigger than a two-liter bottle will provide enough hydrogen to run a mid-range family car."

Source: Physorg
In this article: ammonia, fuelcell, GreenFuel, hydrogenfuelcell, hydrogren, Science and Technology Facilities Council, STFC, transportation
All products recommended by Engadget are selected by our editorial team, independent of our parent company. Some of our stories include affiliate links. If you buy something through one of these links, we may earn an affiliate commission.