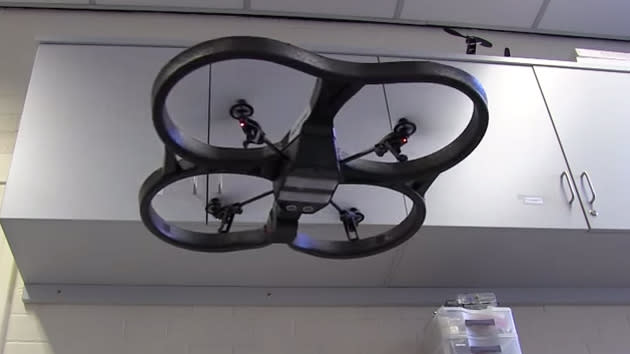 Flying robots can already spot some objects by themselves and occasionally improvise, but they'd ideally never need help -- they should find their way around even if they're in unfamiliar territory. The University of Sheffield may be close to fulfilling that dream. Its experimental quadcopters combine reference points in camera footage with barometric and ultrasonic sensors to not just map their environment, but understand it; they can detect interesting objects and investigate all on their own. This could be particularly handy for rescue crews and others in hazardous situations, since they could identify survivors or operate machinery while keeping human intervention to an absolute minimum.

Crucially, these drones also know how to deal with each other; they gradually learn to predict other robots' behavior and coordinate so that they can pass by without collisions. Researchers believe they'll eventually get entire copter squadrons collaborating on projects without requiring pre-programmed routines. The world-sensing technology is still young, but it hints at a future where airborne automatons handle riskier (or simply very complex) jobs without needing close oversight.

Source: University of Sheffield
In this article: autonomous, barometer, drone, flying, robot, robots, science, ultrasound, UniversityOfSheffield, video
All products recommended by Engadget are selected by our editorial team, independent of our parent company. Some of our stories include affiliate links. If you buy something through one of these links, we may earn an affiliate commission.