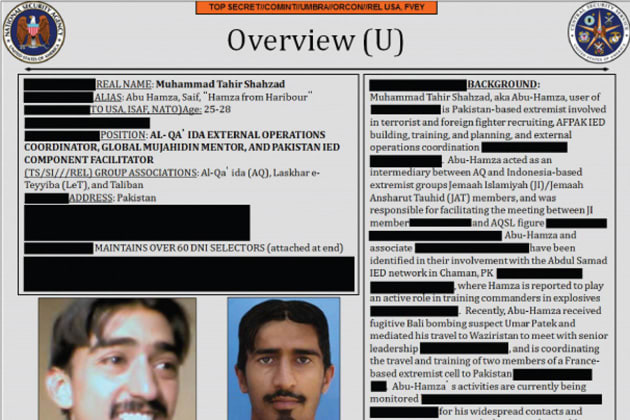 It's no secret that the NSA's surveillance efforts reach far and wide. However, we now know which sort of people get caught in that dragnet -- and most of them, it turns out, are very ordinary. About 90 percent of users in a cache of Intercepted messages (leaked by Edward Snowden to the Washington Post) were innocents who either talked to suspects or simply happened to be in the wrong chat room at the wrong time. Some of the information is very personal, too, ranging from kids' school records to couples' love affairs.

The NSA has US authority to spy abroad, and the intercepted data shows that these large-scale sweeps can be effective in fighting hostile governments or terrorists. Some of the messages led to the capture of bomber Muhammad Tahir Shazad (aka Abu Hamza, pictured here), for instance. With that said, there are concerns that the agency is holding on to personal info that will never, ever be relevant to its investigations. It's not held to the same standards for incidental content gathering as agencies like the FBI, which has to stop wiretapping if a family member is on the line.

There's also a worry that the NSA isn't doing enough to protect US residents' privacy. While analysts masked 65,000 references to Americans in the cache, the Post believes that roughly 900 of the visible email addresses also belong to stateside users; it's not known if they're all legal targets. Whether or not they are, leaked internal chats suggest that NSA team members play fast and loose with their definition of "foreign." They may only look at the languages in use, or make assumptions about the origins of chat room participants and internet connections.

The Office of the Director of National Intelligence is quick to argue that Snowden didn't leak raw intelligence data, and insists that there are tight safeguards that limit access to trained agents; in theory, the unfiltered stream doesn't get into the wrong hands. Snowden was trained, however, and he claims that his private contractor role offered a direct look at the content without supervision. The fear isn't that information escapes into the wild, though. Rather, it's that the material both represents a breach of regular people's privacy and carries the potential for abuse -- as we've learned in the past, NSA agents aren't always on their best behavior.

Source: Washington Post
In this article: EdwardSnowden, espionage, intelligence, internet, nsa, spying, surveillance
All products recommended by Engadget are selected by our editorial team, independent of our parent company. Some of our stories include affiliate links. If you buy something through one of these links, we may earn an affiliate commission.