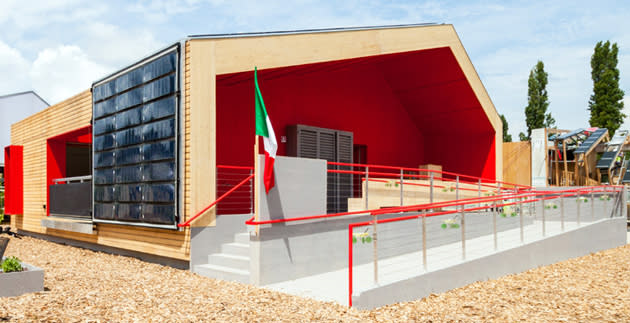 Solar Decathlon Europe is officially underway in Versailles, where 20 teams of students from 17 different countries are competing to build the world's most efficient solar-powered homes. Like the American version, the European Solar Decathlon has attracted some truly innovative entries. For example, a team of students from Berlin presented a plan for refurbishing a turn-of-the-century apartment building with solar panels.

Preservation was a popular theme in this year's competition; the Atlantic Challenge Team, which is based in France, presented a plan for rehabilitating a 120-year-old building into solar-powered, modular apartments. A team from Delft University of Technology designed and presented a renovation project that was inspired by greenhouses. The Rhode Island School of Design produced an innovative house that consumes 90 percent less energy than the typical home and is powered almost entirely by the sun. And the RhOME for denCity team produced a design for a top-floor apartment that incorporates a series of clever passive strategies.

Global renewable energy capacity has nearly doubled over the past nine years, with wind and solar energy carrying the biggest gains. According to a new report, China is far and away the world leader in wind energy, and Germany is tops when it comes to solar production. While renewable energy production continues to grow, clean energy storage technology is starting to catch up. Scientists at USC recently developed a new type of rechargeable battery that is cheap to build, water-based and made out of green components with no toxic chemicals and no metals. And in other renewable energy news, Boston officials announced plans to roll out a series of solar-powered "Soofa" public benches that will enable citizens to charge their phones while they rest. The attractive charging stations double as environmental monitors, and they can charge two phones at a time.

A high-speed, levitating, energy-efficient transportation system could soon be coming to the Israel Aerospace Industry campus in Lod, Israel. The "jet-like" vehicles employ state-of-the-art passive magnetic levitation technology, which could revolutionize urban and suburban public transportation. And after political wrangling, Tesla has received approval to build its first service center in New Jersey. This spring, the New Jersey Motor Vehicle Commission banned Tesla from operating dealerships within the state, but that is expected to change soon because the state Assembly just voted unanimously to allow Tesla to sell its cars directly to consumers.

It's officially mosquito season in many parts of the Northern hemisphere, and one Sri Lankan newspaper has created the world's first mosquito-repellant newspaper, so you can catch up on current events in peace. The Mawbina newspaper teamed up with the ad agency Leo Burnett Sri Lanka to create the mosquito-repellant papers as part of a public health campaign. Speaking of public health, a scientist just cooked up a new supervirus in a lab that could potentially wipe out humanity -- don't ask us why.

It's also air-conditioning season, and Inhabitat has come up with three simple tips to help you save money on your energy bill this summer. Coffee drinkers in London can now feel a little bit less guilty about ordering a latte, because the world's first recyclable paper cup is about to hit the streets in the United Kingdom. And a startup named Modern Meadow recently obtained $10 million in funding to bioengineer cow-free leather. The company uses a tissue-engineering technique known as "biofabrication" to grow leather from skin cells, and it doesn't cause any harm to animals.

In this article: ecofriendly, green, inhabitat, ThisWeekInGreen, transportation
All products recommended by Engadget are selected by our editorial team, independent of our parent company. Some of our stories include affiliate links. If you buy something through one of these links, we may earn an affiliate commission.