Tinder will let you list your sexual orientation in your profile 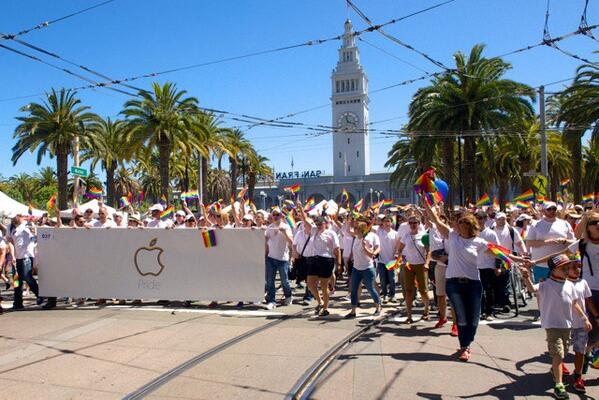 On June 29, the city of San Francisco held its 44th annual Pride parade, a cultural gathering of civilians and businesses showing their support for the LGBT community. Among those companies was Apple, who had thousands of employees -- including CEO Tim Cook -- show up to march in the festivities. Employees gave out free iTunes gift cards and wore special t-shirts to signify their support.

Apple has posted a new video, set to Coldplay's "Sky Full of Stars" showing an overview of the company's experience during the Pride parade, from preparation to marching. In keeping with Apple's esthetics the clip is beautifully shot and edited. Here's the company's description of the video.

On June 29, thousands of Apple employees and their families marched in the San Francisco Pride Parade. They came from around the world -- from cities as far as Munich, Paris, and Hong Kong -- to celebrate Apple's unwavering commitment to equality and diversity. Because we believe that inclusion inspires innovation.

During the event Tim Cook tweeted out the following.

Tim Cook has been a public supporter of LGBT equality cause, penning an editorial for the Wall Street Journal in support of the Employment Non-Discrimination Act last year.

You can view Apple's Pride video below.

In this article: lgbt, pride, tim cook
All products recommended by Engadget are selected by our editorial team, independent of our parent company. Some of our stories include affiliate links. If you buy something through one of these links, we may earn an affiliate commission.