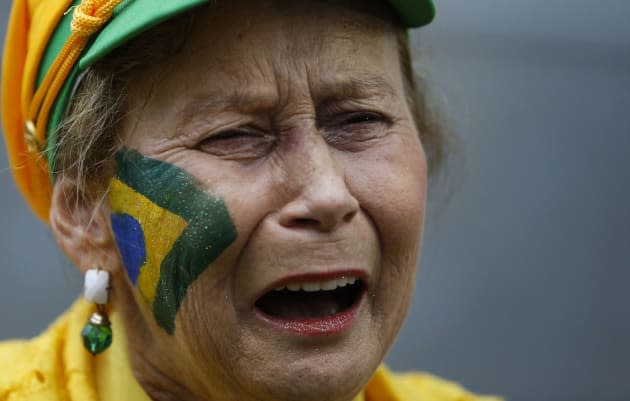 Maybe you overheard your coworkers bellowing from down the hall. Maybe you follow lots of sports fans on Twitter. Or maybe you saw a link to that Sad Brazilians Tumblr. The point is: Yesterday's 7-1 Germany vs. Brazil World Cup match was so painful, that you didn't even have to be watching to know Brazil was getting destroyed on its home turf. As it turns out, you probably didn't need to be watching to join the discussion, either. According to Twitter, there were 35.6 million tweets about the match at last count, making it the most-talked-about sports game on the social network ever. And yes, that's "most-discussed sports game, period," not just the most-discussed football match. Which makes sense: This was no ordinary game. Germany became the first team to score five goals in the first 29 minutes of a World Cup match, and its total of seven goals is also the most scored ever during a World Cup semi-finals face-off. Just goes to show that the people like goals as much as they enjoy embarrassing losses.