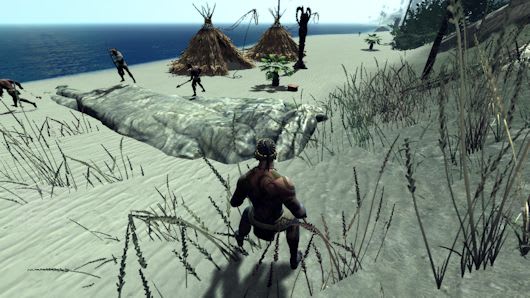 Yesterday, I examined up-and-coming dinosaur-survival MMO Beasts of Prey. Today, let's look at another game in the same niche genre: The Stomping Land.

The Stomping Land isn't technically billing itself as an MMO, but it boasts a semi-permanent world. But my experience in it was nothing like the trailers shown back in May. The current game is totally different. In fact, it seems to have regressed. There's no customization, there are no berries, and no one I talked to knew how to name a tribe. It feels like a semi-permanent shooter, similar to other survival games except without a lot of the building. You either make a teepee or you don't. You make a bow or you don't. You have a dinosaur mount or... you don't. The biggest servers I saw had 24 people, meaning I was able to avoid other players very often, but the game was more fun when I encountered people -- at least people who didn't one-shot me and waltz away.

The game also gives you no real inventory. There's no magic bag where you can place 100 pieces of wood while frolicking across the land. You carry what you can actually hold (i.e., if you gather a rock, you literally have to hold the stone; for two rocks, you lay them down to make a basket, add other things to the basket, and either craft it into something or literally drag it around by a rope). Don't look at crafting and item management as you would in other games, especially other survival-based titles. You don't drop anything on death (currently, anyway) because your pile of rocks or wood can be stolen freely, one item at a time, and unless someone has a teepee nearby and friends who guard it around the clock to ensure it doesn't get stolen or decay, it simply isn't worth it. You end up babysitting your materials as you move them to a camp site (sometimes building in a convenient area is more trouble than it's worth) rather than hoarding, but as someone who was in the Cub Scouts as a child and now has to do this in everyday life in Japan, I'd say it feels realistic enough. You have to choose what to carry based on your immediate need and your ability to carry it, not on arbitrary pack space. 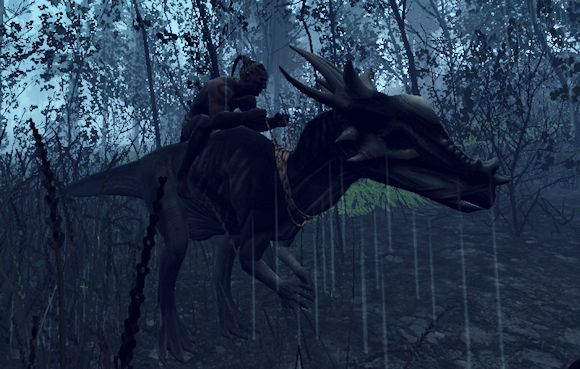 The problem is that crafting doesn't feel important in TSL because there's so little of it, and what little there is, is too basic. And yet crafting feels like a requirement for all players, not just because you need to cook food to live but because even powerful items like bolas and one-hit spears are so easy to make. You can carry a few weapons and some special herbs, but not duplicate items or mountains of ammo. And there are no guns in the game. You are a weak, tribal human in a world ruled by dinosaurs. Let go of your pride and figure out how to live long enough to tame one.

Speaking of dino-taming, I think it's a mixed bag. The initial "capture" isn't as entertaining as Dragon Prophet's rodeo-style taming. You have to go into a (currently broken) cave, get some herbs, use the stars to track dinosaurs (even by day!), and revive a dead dino to show it that you're friendly. What comes next is more difficult. The beasts resist you. While riding, you might turn clumsily. If you dismount, the dino might run off into the woods, never to be seen again. Controlling dinos in the early stages is hard but feels satisfying. In a savage land of freaking dinosaurs, I don't want to ride an obedient scaled horse; I want something with some spirit. As cool as a car might be in other survival games, I'd much rather choose "driving" a dino. 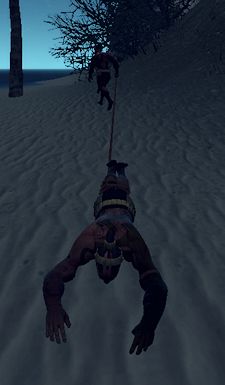 The game is far from perfect. There is currently no built-in voice chat, which I'm fine with, but I know other survivalists will be confused by that. The AI is buggy, so dinosaurs break down and run laps around you. If you get bola-ed, you're screwed. There's nothing you can do about it. You can't break out, fight, run away, just give up, log out, and lose everything. The same goes for being in a cage, except that you'll pray to starve quickly to hasten your release.

Here's an interesting bit: You can't see people's names until you get close enough to inspect them unless you belong to the same tribe. This is really good for PvP roleplayers, but they're such a minority that I wonder how appreciated the feature is.

TSL feels promising, but it also isn't done enough to justify a purchase. There's too little too create, and it's too easy to destroy what you do create, so world-building, while possible, is so limited and impermanent that it's hard to say anything about it other than that it exists and it functions on a very basic level. Maybe that's why it's more of a lobby game, but it also feels as if you have to group before you jump in. Just like a PUG raid, PUG PvP is random, chaotic, and prone to failure: Imagine bugged dinosaurs doing laps around me while my fellow tribesmen flailed about, swinging hatchets and killing each other by accident in pursuit of mobs too bugged to die!

I think Beasts of Prey is more complete and easier to appreciate for an average gamer. It allows for more building and more sense of a world. In fact, for those who are just getting into the genre and aren't usually the hardcore PvP type, BoP might be a better game than Rust (but maybe don't count Rust out yet). If, however, you want a glimpse of this genre in a brutal, unique way that just needs more love and funding, play The Stomping Lands. If, however, first impressions matter and you're not into paid alphas, hold onto your money. Neither game is truly finished.

Massively's not big on scored reviews -- what use are those to ever-changing MMOs? That's why we bring you first impressions, previews, hands-on experiences, and even follow-up impressions for nearly every game we stumble across. First impressions count for a lot, but games evolve, so why shouldn't our opinions?
In this article: alpha, alpha-test, alpha-testing, beasts of prey, beasts-of-prey, beta, bop, dino-survival, dinosaurs, early-access, featured, half-feature, hands-on, kidnapping, opinion, preview, previews, pvp, rust, Sandbox, starvation, steam, steam-greenlight, stomping-land, survival, Survival-Horror, taming, testing, the-stomping-land, tsl
All products recommended by Engadget are selected by our editorial team, independent of our parent company. Some of our stories include affiliate links. If you buy something through one of these links, we may earn an affiliate commission.