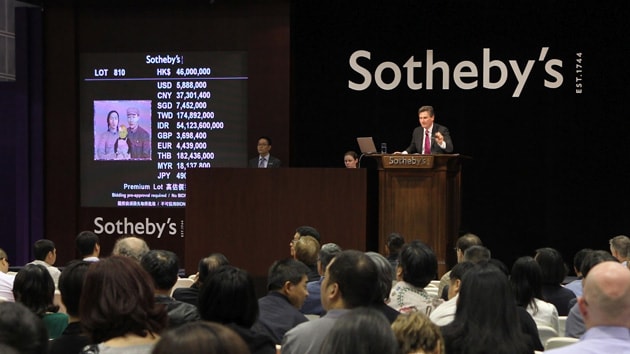 Sotheby's auctions can be prohibitively expensive, but part of the problem is getting there in the first place; not everyone can send people to bid on their behalf. Distance shouldn't be an issue in the near future, though. The company has struck a deal that will have eBay launch a special section for "rare, unique and premium" (i.e. costly) goods where Sotheby's will stream live auctions worldwide, complete with real-time bidding. The section will be limited to New York auctions when it launches in the fall, and it won't include the biggest sales. In short, you won't be scoring a Monet from the comfort of your couch. Sotheby's will eventually expand to other locations, however, so you might not be stuck if some valuable antique goes up for grabs in Hong Kong.

This isn't the first time that upscale auctions have gone online, or even the first time that Sotheby's and eBay have worked together; they briefly tried a partnership in 2002. Nonetheless, the new arrangement might be vital to Sotheby's future. Christie's has already had success selling items for millions of dollars online, and Sotheby's risks missing out if it doesn't expand its online presence -- especially in an era when young technology executives can quickly join the ranks of the nouveau riche. The move also widens the kinds of objects that the company can sell. Instead of focusing so many of its efforts on super-exotic items, it can auction off family heirlooms, old wines and other items that are just rare enough to merit more than the usual eBay sale.

Via: New York Times
Source: Sotheby's (PDF)
In this article: auction, e-commerce, ebay, internet, shopping, sothebys
All products recommended by Engadget are selected by our editorial team, independent of our parent company. Some of our stories include affiliate links. If you buy something through one of these links, we may earn an affiliate commission.