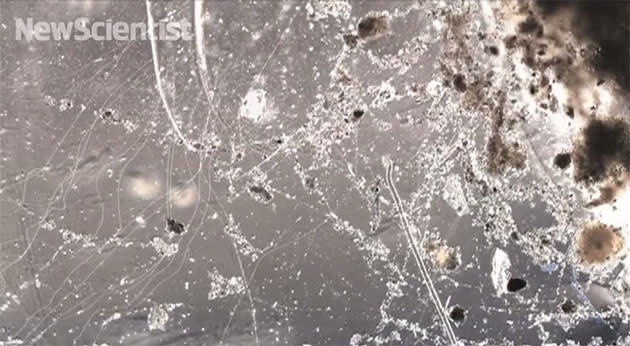 All life is ultimately powered by electricity, albeit indirectly, since most organisms consume sugars that produce electrochemical reactions. Several types of bacteria are known to skip the sweets and go straight for the electrons, however -- and researchers have discovered that they may be everywhere. The New Scientist reported that biologists have grown bacteria (Mariprofundus ferrooxydans PV-1) that harvest electrons directly from iron electrodes. Several species were literally teased out of soil from a seabed floor and deep well in Death Valley, California, just by applying a charge to the ground. In a lab environment, a separate team found that they can be kept alive exclusively with electricity and no other sugars or other nutrients (see the video, below).

Scientists found that up to eight species may eat and excrete electrons, including some with remarkable properties. For instance, hundreds of thousands of bacteria can form daisy-chained "wires" an inch or so long, and tap seawater oxygen for energy. Such filaments can hold soil together and conduct electricity about as well as standard copper wire. Those properties could lead to interesting practical applications, like "SPUDs" or self-powered useful devices that clean up pollution, or bacteria that create electric "biocable" networks in the soil. Finally, the discovery is letting researchers test one of the most basic principals of biology: the minimum amount of energy required for life to survive.

Via: Gizmodo
Source: The New Scientist
In this article: bacteria, electricity, electrons
All products recommended by Engadget are selected by our editorial team, independent of our parent company. Some of our stories include affiliate links. If you buy something through one of these links, we may earn an affiliate commission.