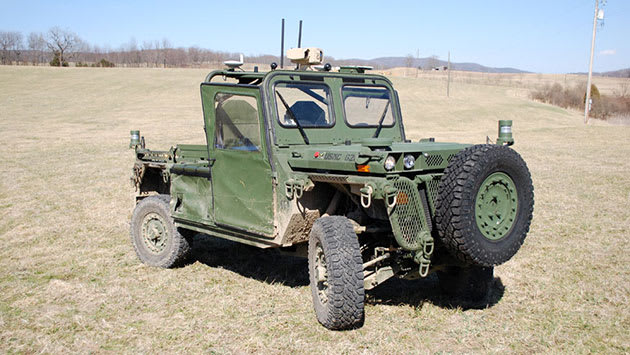 Automakers aren't the only ones working to implement self-driving technology. The US Marine Corps has teamed up with TORC Robotics' (among others) to work on a Jeep-esque option outfitted with the company's Ground Unmanned Support Surrogate system -- or GUSS to save the mouthful. Here, GUSS is used to power a self-driving version of the Marine two-seater truck dubbed the Internally Transportable Vehicle (ITV). As the name suggests, the compact option can be carried on a helicopter or plane for deployment, and its beacon can either send it to a specific location or maneuver it via remote control. As you may recall, TORC's GUSS system was installed on a Polaris 6x6 ATV a few years back, so the tech has been through its share of tests. The goal is for the vehicle to be used to deliver supplies (up to 1,600 pounds) or evacuate wounded soldiers by determining its own route or being controlled from afar at a speed of 8 MPH. An unmanned ITV reamains in the testing phase, but the team sees similar options in the field in the next five years.

Via: Ars Technica
Source: Fox News
In this article: autonomous, autonomousvehicles, jeep, military, video
All products recommended by Engadget are selected by our editorial team, independent of our parent company. Some of our stories include affiliate links. If you buy something through one of these links, we may earn an affiliate commission.