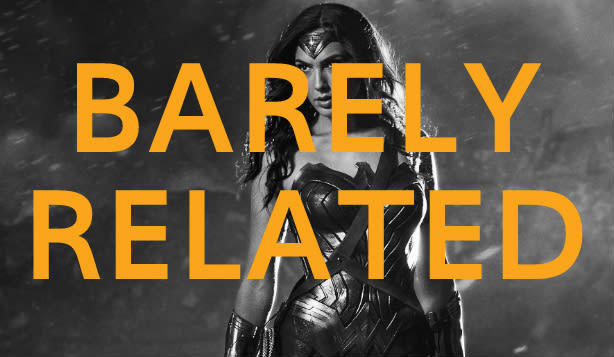 Here she is, Wonder Woman as envisioned by Zack Snyder and a few photo-enhancing filters. Things worth noting: Actress Gal Gadot has Wonder Woman's trusty lasso, sword and indestructible bracelets, along with thigh-high boots. Sure, they have heels, but at least they're wedges.

The plated bodice is a good idea, though fighting evil in a metal bustier sounds uncomfortable at best and deadly at worst. Someone get this warrior some straps. Overall, we're getting a distinct Xena vibe from the coloring and Gadot's powerful pose – not bad at all. 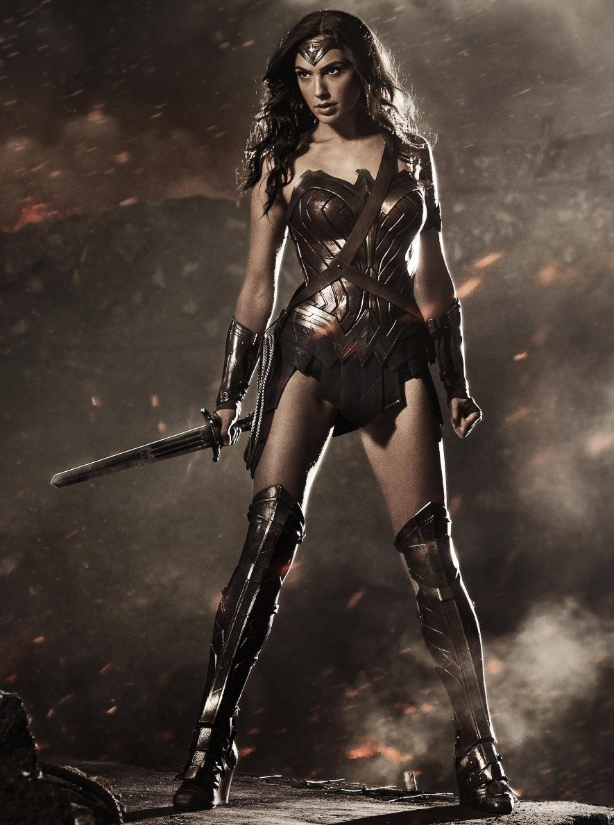 A film about everyone's favorite narcissistic mercenary could go wrong quickly, but footage starring Ryan Reynolds and a string of tongue-in-cheek one-liners give us hope for the future of Deadpool. The clip sees Deadpool sing along to Gwen Stefani, gracefully drop into a car full of baddies, and then take them all out with humorous ease. He even has time to draw a little picture of himself decapitating one of his black-clad foes, right before he follows through on the pictured promise. Twentieth Century Fox is taking these videos down at a rapid pace, but there are still a few in the wild.

The footage appears to come from Blur, the studio behind a ton of video game cinematics, including for Batman: Arkham Origins and Arkham City, League of Legends, BioShock: Infinite, Elder Scrolls Online, and a bunch more.

Guardians of the Galaxy is out, here's a Marvel retrospective and some numbers

Guardians of the Galaxy is on track to break all kinds of summer records after Thursday's opening-night bounty of $11.2 million, beating out the year's previous Thursday superstar, Captain America: The Winter Soldier.

To get you in the superhero mood, Marvel released "Marvel's Phase 1 & 2 – A Look Back," a video recapping its recent movie milestones and closing out with a taste of the Guardians.

The Doctor could tour the entire universe, but instead he's picked our little planet for a quick publicity spin before the TV debut of Doctor Who series eight on August 23. At each stop, the new Doctor, Peter Capaldi, will be in attendance, along with Jenna Coleman, who plays his companion, Clara. The tour starts in Cardiff on August 7, where lucky fans will get an early screening of the first episode. Then it's on to London, Seoul, Sydney, New York, Mexico City and Rio de Janiero, all between August 7 - 19.

We know The Doctor is used to traveling, but whew.

Speaking of The Doctor and Clara, Capaldi is taking a stance on romantic entanglements between those two characters. "There'll be no flirting, that's for sure," Capaldi told the Sunday Times Magazine (via The Guardian). "It's not what this Doctor's concerned with. It's quite a fun relationship, but no .... I think there was a bit of tension with that at first, but I was absolutely adamant."

Capaldi said his Doctor Who is more dramatic and somber, adding another level to the show's existing "breathless vigor."

Princess Leia blasts into comics with her own series

Star Wars: Princess Leia is a five-issue mini-series by Mark Waid and Terry Dodson due to premiere in early 2015. The series follows Leia after the destruction of Alderaan, her home planet, and as she climbs the ranks of the Rebel Alliance.

Two other Star Wars comics are due out in the same early-2015 window, titled Star Wars and Darth Vader. All three series take place soon after the events of Star Wars Episode 4: A New Hope. 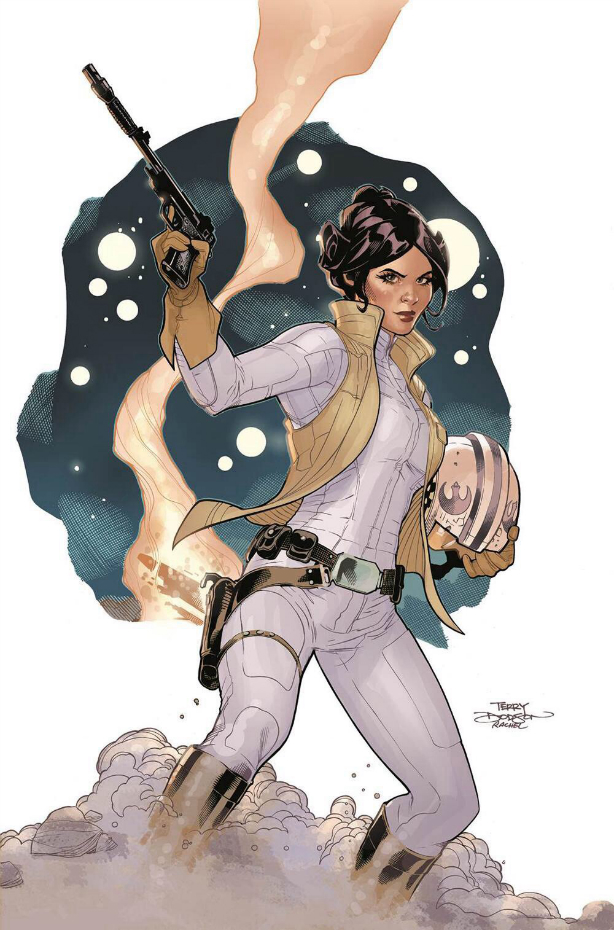 Unlock your phones and be free

Phone unlocking – altering a phone's firmware to work on other networks or perform fun new tasks – is legal in the US today, now that President Barack Obama has signed into law the Unlocking Consumer Choice and Wireless Competition Act. Senator Patrick Leahy (D-VT) helped push this legislation forward earlier in the year and he made the announcement this morning, calling the signing "a win for American consumers, a win for wireless competition, and an example of Democracy at its best – bipartisan Congressional action in direct response to a call to action from the American people."

An online petition to legalize phone unlocking recently gathered more than 100,000 signatures, prompting the White House and Congress to act on the issue. The bill signed today isn't a forever kind of deal – every three years, the Librarian of Congress will review the terms and decide whether to keep the bill or ditch it. Set those phone alarms for 2017, everyone.

The Spongebob Squarepants Movie: Sponge out of Water is due out in February 2015 and it stars the show's cast as 3D characters on dry land, interacting with real people (and pirates). This thing is going to bring in boatloads of money for Paramount and Nickelodeon.

Starting today, Russian bloggers with an audience of at least 3,000 are required to register with the Russian government, allowing officials to censor content including slander, hate speech, profanity and extremist views. The registration process reveals bloggers' identities to Russian authorities, removing the anonymity that allows many activists to write negatively about the government.

These rules mirror those in place for traditional, large-scale media outlets, allowing Russian authorities to request verification of information prior to posting. The law applies to anyone writing in Russian to a Russian audience, regardless of the author's physical location. Fines range from $285 - $855, though larger media companies can be fined up to $14,285.

President Vladimir Putin signed the "blogger law" in early May as a set of amendments to Russia's Administrative Code.

Maisie Williams, the actress who plays Arya Stark on Game of Thrones, hates people who spoil the show for those who haven't read the books. As she puts it: "I'm so sick of going on the internet and seeing all the book readers being snobby, spoiling it for other people, then saying, 'Well, it's not a spoiler. The books have been out for years.' Like, couldn't you just stop being mad for a second and let other people enjoy the show?"

There is only one thing we say to spoilers: Not today.

The most popular things at San Diego Comic-Con, according to Twitter

As compiled by research companies Mashwork and Way to Blue, the two most-talked-about things of San Diego Comic-Con this year were Batman v. Superman: Dawn of Justice and Game of Thrones. These were followed by Teen Wolf, The Walking Dead and Avengers: Age of Ultron (the last of which we're surprised to see so far down the list). Ladies out-tweeted guys 53 percent to 47 percent, and Wonder Woman was the "Superhero of SDCC'14," with 149,316 mentions.

WB was the largest studio at Comic-Con, taking up 37 percent of the conversation, followed by Walt Disney Pictures and HBO.

[Images: Warner Bros., Marvel Comics, Way to Blue]
In this article: barely-related, comic-con-2014, Deadpool, doctor-who, game-of-thrones, guardians-of-the-galaxy, SDCC, sdcc-2014, spongebob, star-wars, wonder-woman
All products recommended by Engadget are selected by our editorial team, independent of our parent company. Some of our stories include affiliate links. If you buy something through one of these links, we may earn an affiliate commission.