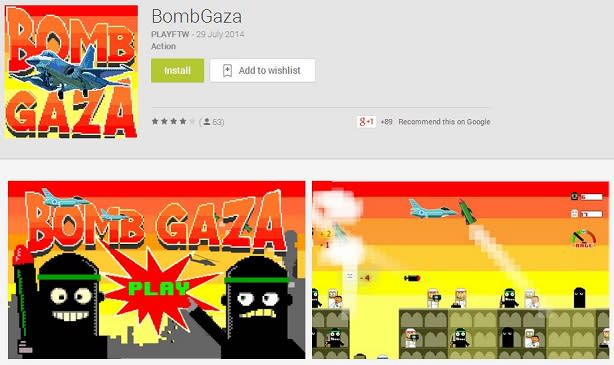 The Google Play store is under criticism for recently hosting multiple games centered around the Israel-Gaza war. Apps such as Bomb Gaza and Gaza Assault: Code Red recently appeared on the Android marketplace before eventually being removed today.

A cached version of Gaza Assault's store listing said players could "take control of an Israeli UAV equipped with powerful weapons in an attempt to secure the region" in the game, which was added to the store on July 21. Likewise, a cached page for Bomb Gaza noted that players in the game "drop bombs and avoid killing civilians." It was added to Google Play on July 29 by PlayFTW, a developer with two other apps on the market, Piano and Space War: New Era.

Director of The Council for Arab-British Understanding Chris Doyle told The Telegraph that "these games glorify the horror and violence of the bombing of Gaza, sanitising for a younger generation what is a dreadful conflict that has killed thousands and decimated the lives of hundreds of thousands." Doyle added that "You can have video games that deal with war, but when you base it in a reality of a conflict that's going on right now it's extremely problematic."

A third game, Whack the Hamas, is still available on Google Play, and introduces Whack-a-Mole-style gameplay to the controversial theme. It joined the marketplace this past Friday. Madfal Studio's Gaza Hero is also available on the Android marketplace since its addition on July 16. The developer's description of the app notes that revenue earned from it will be donated to Gaza. We've reached out to Google about the apps and will update as we learn more.

[Image: Google Play]
Source: The Telegraph
In this article: android, app, apps, bomb-gaza, Gaza, gaza-assault-code-red, gaza-hero, google, google-play, Israel, mobile, whack-the-hamas
All products recommended by Engadget are selected by our editorial team, independent of our parent company. Some of our stories include affiliate links. If you buy something through one of these links, we may earn an affiliate commission.