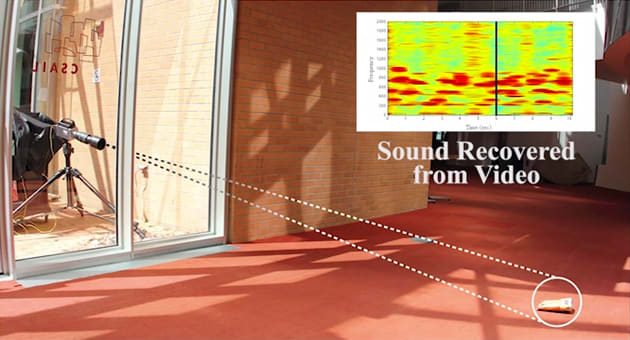 You may want to be careful about the conversations you hold in the future; if you're near a window, someone might be listening in. A team of researchers from Adobe, Microsoft and MIT have developed a visual microphone algorithm that picks up audio by looking for microscopic vibrations in video footage. The technique exploits the rolling shutter effect in digital cameras (where the sensor reads pixels one row at a time) to detect sound-related movements that might otherwise be invisible; the only gear you need is a camera that can record at high frame rates. It's good enough to capture singing from a bag of potato chips, and musical tones from a potted plant.

Don't worry about optical eavesdropping just yet. The experiment only got accurate reproduction with specialized cameras that shoot at up to 6,000 frames per second; an off-the-shelf device with 60fps recording can identify people's voices, but it's hard to make out words. Provided the technology reaches fruition, it would most likely be used by investigators that want to hear what suspects say when they're not on the phone. It would be useful for more than surveillance, too, as team member Abe Davis believes the visual mic could identify a material's properties without making contact. It's definitely clever tech -- let's just hope that it's used more for science than snooping.

Source: MIT (1), (2)
In this article: adobe, camera, microphone, microsoft, mit, science, surveillance, vibration, video, visualmicrophone
All products recommended by Engadget are selected by our editorial team, independent of our parent company. Some of our stories include affiliate links. If you buy something through one of these links, we may earn an affiliate commission.