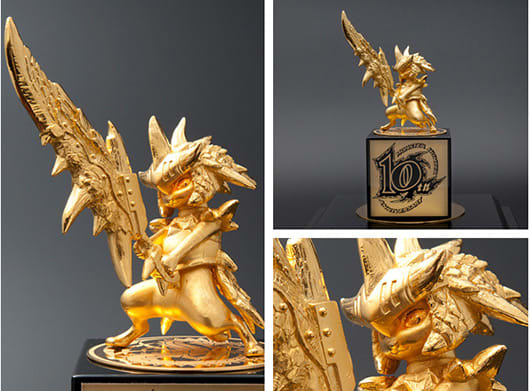 After a decade of swinging massive weapons at unfeasibly large dinosaur creatures, Capcom has decided to celebrate the 10 year anniversary of Monster Hunter with a 24k gold statue of the series' adorable Felyne mascot.

According to Siliconera, the anniversary statue depicts a Felyne wearing full Rathalos armor and smirking in that simultaneously adorable and infuriating way that only bipedal cats can. It stands 3.5 inches tall, 2.16 inches wide and has a depth of five inches. Despite only weighing about a quarter of a pound, the miniature statue is made of solid gold, which means this little Felyne has an asking price of 2.99 million yen (about $29,213).

It's currently unknown if the statue will remain exclusive to Japan or if it will also be available in other regions. If you desperately need gold Felynes in your life and would rather import than wait, keep in mind that Capcom has instituted a strict "10 statues per customer" limit.
[Image: Capcom]
Source: Capcom JP, Siliconera
In this article: capcom, felyne, gold, monster-hunter, monster-hunter-4, statue
All products recommended by Engadget are selected by our editorial team, independent of our parent company. Some of our stories include affiliate links. If you buy something through one of these links, we may earn an affiliate commission.