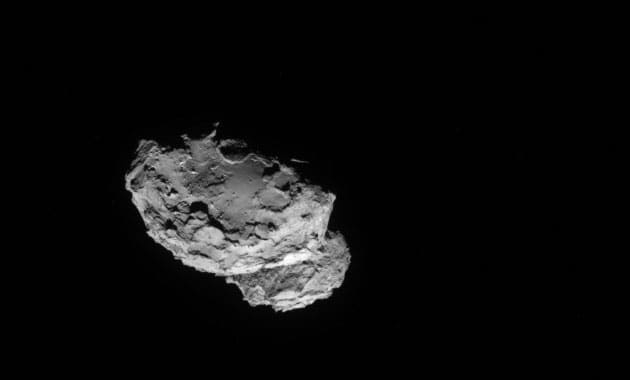 After ten years in space and many complex maneuvers later, the European Space Agency's Rosetta spacecraft is finally in position to rendezvous with the 2.5-mile diameter comet 67P. Starting at 4AM EST today (8AM GMT), ESA will broadcast a live webcast discussing the science and history of Rosetta. Around 5AM EST (9AM GMT) Rosetta will begin its close approach and start transmitting the first signals from the comet's orbit. Once in position, Rosetta will execute a final "close approach trajectory insertion," a six minute thruster burn that will bring it near enough to the comet to be captured by its gravity. Later in the year, a 62-pound lander called Philae will leave the mothership and lock itself down to the comet with harpoons. Using onboard instruments, it'll examine its composition and relay the information to earth. In November, Rosetta will tag along with the comet as does a close orbit around the sun, examining how it changes when heated. Meanwhile, enjoy the show (below) as it approaches the giant rock.

Source: ESA (Rosetta)
In this article: 67PChuryumov-Geraisimenko, Comet, ESA, European Space Agency, Rosetta, space, video
All products recommended by Engadget are selected by our editorial team, independent of our parent company. Some of our stories include affiliate links. If you buy something through one of these links, we may earn an affiliate commission.