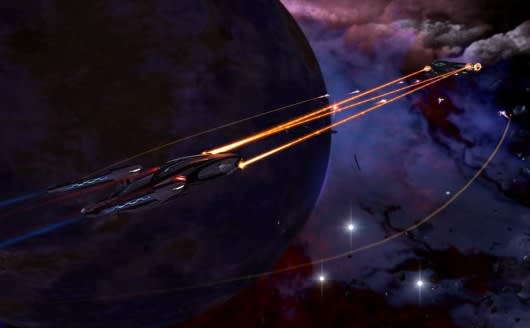 If a friend tries to make a bet with you that Star Trek Online is out of new starship designs, don't take it. Executive Producer Stephen D'Angelo posted a dev diary today stating that the team is working on "between seven and 10 new Tier 6 ships" across all three factions for Delta Rising's launch.

The new tier of starships won't necessarily make your old Tier 5s obsolete. D'Angelo promised that, if players desire, they can continue to fly and fight in their favorite ships: "We are dedicated to making sure that players can continue flying the ships they love and still have those ships be competitive at the new level 60 endgame. We do not want players to feel that their investment in the current ships is devalued by the expansion, and this is a very challenging thing to do for a game with four years of history since the last level cap increase."

D'Angelo said that more details about Delta Rising will be forthcoming except for the storyline, and that the expansion should be launching in October.
Source: Delta Rising's new ships
Coverage: Star Trek Online
In this article: cryptic, cryptic-studios, delta-rising, dev-diary, expansion, f2p, free-to-play, perfect-world, perfect-world-entertainment, pwe, sci-fi, ship, ships, star-trek, star-trek-mmo, star-trek-online, starships, sto
All products recommended by Engadget are selected by our editorial team, independent of our parent company. Some of our stories include affiliate links. If you buy something through one of these links, we may earn an affiliate commission.