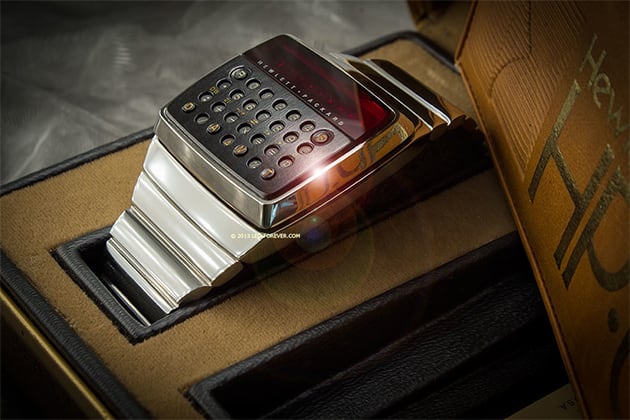 We already know HP is working on a (supposedly) handsome smartwatch of its own, but this isn't the first time the company's tried to glam up your wrist. Let's flash back to 1977: Star Wars was lighting up the box office charts, Andy Gibb just wanted to be your everything and HP made the world's first calculator watch. The HP-01 was a particularly garish monstrosity, its golden chassis festooned with teensy number and operator buttons, but it look at it! It's the pinnacle of retro alpha nerd chic. Really, the only way to top one of those is if you owned some super-rare, unreleased version that languished behind closed doors for years. Well, now you can. It's a prototype, it's made of stainless steel, and it'll only set you back $14,500... assuming you take this eBay seller's word for it. Waste of money? A small price to pay for a bit of forgotten tech history? That's up to you, but you've still got time to decide -- the auction's slated to run for another eight days at time of writing.

Via: The Verge
Source: eBay
In this article: calculator, HP, smartwatch, watch, wearable
All products recommended by Engadget are selected by our editorial team, independent of our parent company. Some of our stories include affiliate links. If you buy something through one of these links, we may earn an affiliate commission.