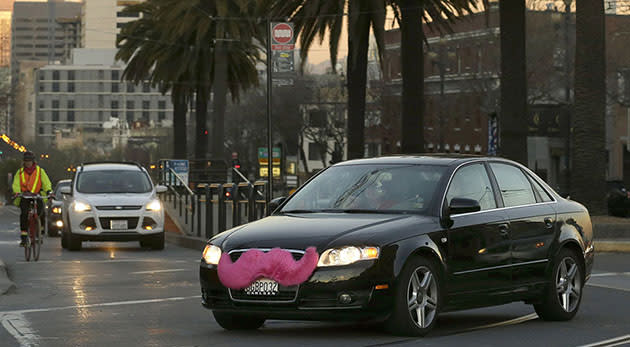 Ridesharing company Uber is worthy $18 billion thanks to its rider-friendly practices, but rival Lyft says it hasn't been so nice to competitors. The company supplied CNNMoney with data showing that 177 Uber employees in the US booked and then cancelled some 5,560 rides since October of last year. While not technically illegal, such a scheme can make Lyft drivers head to non-existent ride pickups, letting Uber cars swoop into the vacated areas. Lyft added that Uber recruiters are sometimes ordering legit, but low-paying short rides in order to pitch its drivers on switching to Uber. As proof, the company matched phone numbers to known Uber employees or contractors -- for instance, one known recruiter has used 21 different Lyft accounts to order 1,500 cancelled rides.

In response, Uber noted that the problem could be coming from riders interested in earning credits by recruiting Uber drivers. But that doesn't explain the cancellations, and CNNMoney pointed out that Uber has used similarly underhanded schemes before. For instance, it told New York Uber drivers that city regulations prevented them from working for Lyft at the same time, which is untrue. Meanwhile, Uber, Lyft and other services are fighting taxis just for the right to operate in some cities -- so they might do well to cooperate rather than using dirty tricks.

Update: The ridesharing turf wars have since heated up, with back-to-back statements from both companies. An Uber representative has responded to the accusations to the New York Times, stating:

"Lyft's claims against Uber are baseless and simply untrue. Furthermore, Lyft's own drivers and employees, including one of Lyft's founders, have canceled 12,900 trips on Uber. But instead of providing the long list of questionable tactics that Lyft has used over the years, we are focusing on building and maintaining the best platform for both consumers and drivers.

These attacks from Lyft are unfortunate but somewhat expected. A number of Lyft investors have recently been pushing Uber to acquire Lyft. One of their largest shareholders recently warned that Lyft would "go nuclear" if we do not acquire them. We can only assume that the recent Lyft attacks are part of that strategy."

Lyft then fought back against the claims of wanting to be acquired, stating:

"Lyft has more than 100 investors, all of whom are extremely excited that Lyft is approaching I.P.O.-level revenue. Our 'nuclear' strategy is continuing to take market share with 30 percent month-over-month growth, while building the strongest community of drivers and passengers."

In this article: car service, Lyft, ridesharing, tactics, taxi, Uber
All products recommended by Engadget are selected by our editorial team, independent of our parent company. Some of our stories include affiliate links. If you buy something through one of these links, we may earn an affiliate commission.