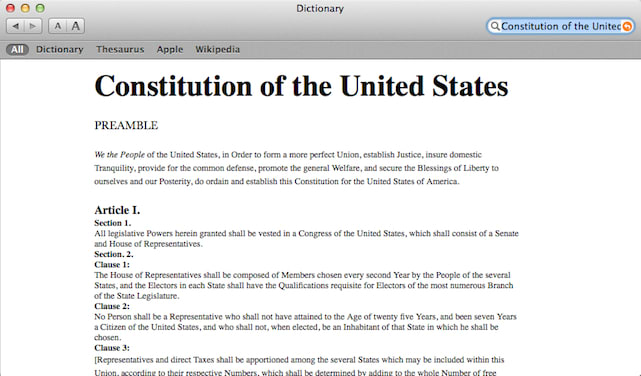 Sometimes when I see just how ignorant many American politicians are of the Constitution of the United States, I get the urge to send them a copy along with some annotations. Perhaps now that more of those in the federal government are using Macs, we might begin to see them paying more attention to this document that outlines the supreme law of the land. Why? Well, there's a copy of the U.S. Constitution on each and every Mac in the Dictionary app.

To see this information from The New Oxford American Dictionary, just launch the Dictionary app from your Applications folder. Once it's up and running, go up to the menu bar and select Go > Front/Back Matter. There you'll not only find such exciting information as who was on the editorial staff and advisory board for the Dictionary, but also a bunch of useful references.

In addition to the aforementioned Constitution of the United States of America, there's also a complete Language Guide, a history of the English language, a list of the fifty states and each state capital, a list of every President of the U.S. from George Washington to George W. Bush (not sure what happened to the current incumbent...), the Declaration of Independence, a list of countries of the world, a list of chemical elements from hydrogen to meitnerium, a cross-reference of standard to metric measure conversions, and the Arabic, Hebrew, Greek and Russian alphabets.

Sure, it's not exactly Wikipedia, but it's sure nice to know that if you're offline and just happen to need to know what the 21st Amendment to the Constitution did (it repealed Prohibition), you've got it at your fingertips.

In this article: constitution, dictionary, dictionary app, how-to, howto, Mac, os x
All products recommended by Engadget are selected by our editorial team, independent of our parent company. Some of our stories include affiliate links. If you buy something through one of these links, we may earn an affiliate commission.