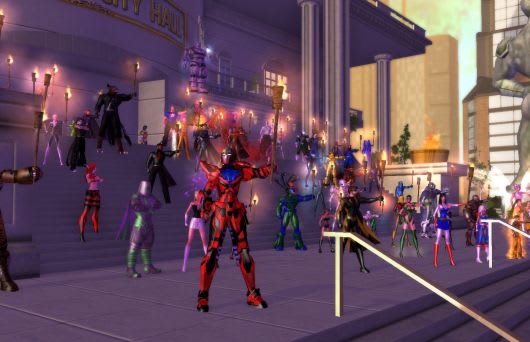 Instead of spending gobs of volunteer development time and money on City of Heroes knock-offs, wouldn't it be better to simply acquire the real deal? That's the thought behind a fan effort to purchase the rights to the superhero MMO from NCsoft, while proving to the publisher that the team has the talent and capability to handle the property.

According to a poster named Ironwolf on the Titan Network message boards, progress is being made on this front. Ironwolf wrote the following on August 13th: "I did contact the team yesterday and got this reply back: Things are moving along. We should have things worth showing fairly soon, made a great leap forward yesterday."

The efforts to purchase City of Heroes started in early March, according to a timeline on the same thread. On March 12th, Ironwolf noted, "Got letter back from [former NCsoft executive] Chris Chung -- it showed that is WAS possible to buy the game." On April 5th, he wrote that the general range of the price is "very doable."

[Thanks to Duane for the tip!]
Source: New efforts #1, New efforts #2
In this article: chris-chung, city-of-heroes, city-of-villains, coh, cov, cox, f2p, free-to-play, freedom, ironwolf, ncsoft, paragon, paragon-studios, superhero, superheroes, titan-network
All products recommended by Engadget are selected by our editorial team, independent of our parent company. Some of our stories include affiliate links. If you buy something through one of these links, we may earn an affiliate commission.