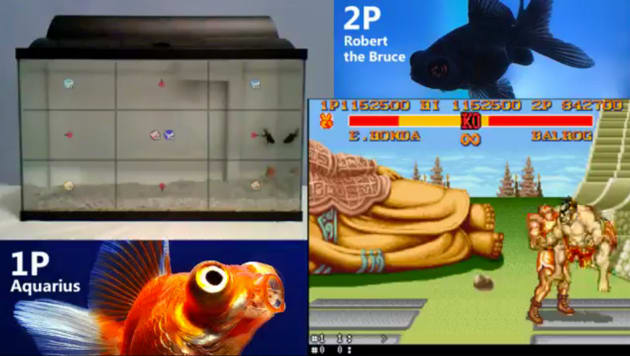 The bar has been raised for fish-controlled video games. Not content with the solo action of Fish Plays Pokemon, Andrew Hill has launched FishPlayStreetFighter, a Twitch stream that lets you watch two fish (Aquarius and Robert the Bruce) square off in Capcom's classic Street Fighter II. It's mapping movement around the tank like before, but it's using a significantly more advanced control scheme to liven things up. Color detection makes the two-player mode possible, and the fish can string together input combos based on where they're swimming -- watch for long enough and you'll see a goldfish throw its opponent across the room. The best part is that the matches actually move along pretty quickly. While you'll sometimes see the fighters wasting time, one fish usually gets a knockout before time is up. The feed doesn't run at all hours (usually between 7:30AM and 10PM Eastern), but it should easily keep you distracted while you're at work.

Source: Twitch, Andew Hill (Twitter)
In this article: capcom, fish, gaming, stream, streetfighter, streetfighterii, twitch, video, videogames
All products recommended by Engadget are selected by our editorial team, independent of our parent company. Some of our stories include affiliate links. If you buy something through one of these links, we may earn an affiliate commission.