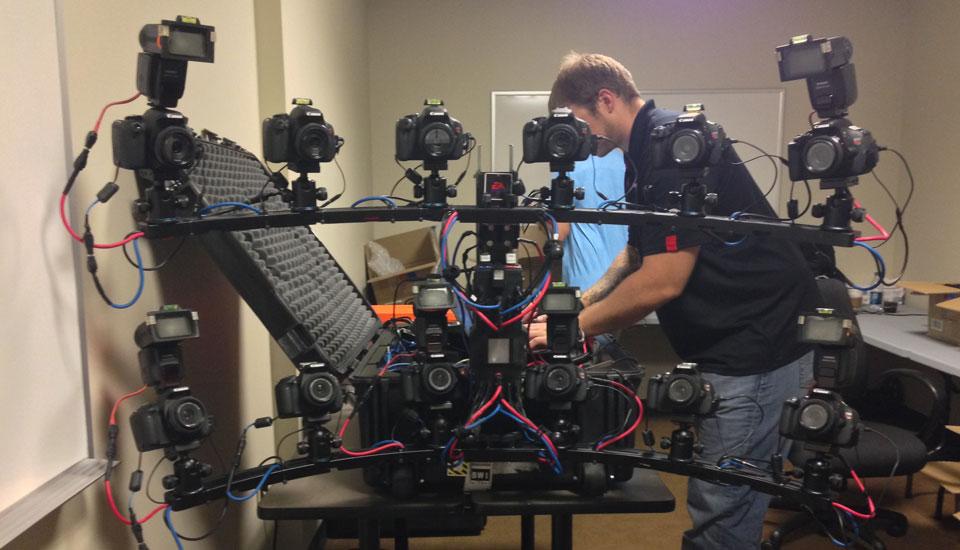 If you've ever wondered how video game studios transform real-life people into their multi-pixeled personas, here's one method. SB Nation's Sarah Kogod recently made the trip to Baltimore where EA was set to capture facial images from the Ravens' players for Madden NFL 15. There, she encountered the developers new "mobile" rig that leverages a dozen DSLRs situated in two rows of six each in order to snap all of the close-up details. The frame is part TV stand and part wheel chair lift that allows the entire thing to be positioned just so from a connected laptop. In fact, three teams, each outfitted with one of the multi-camera rigs, set out this summer to capture player images from all 32 NFL teams during OTAs and training camp. Before now, artists have had to work from stock photos in order to create a player's virtual counterpart, and accuracy suffered. The folks at EA say that as games become increasingly more life-like, that gamers notice "any blemish that's off... people catch that."

In this article: bigpicture, ea, electronicarts, football, gaming, madden, madden15, maddennfl15, thebigpicture
All products recommended by Engadget are selected by our editorial team, independent of our parent company. Some of our stories include affiliate links. If you buy something through one of these links, we may earn an affiliate commission.