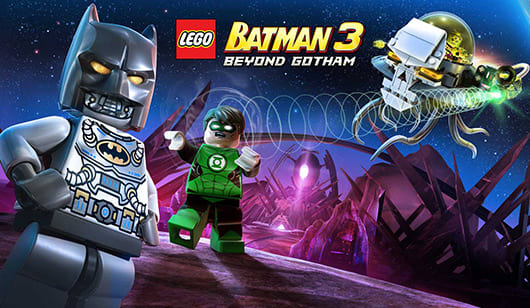 No longer content with striking fear into the hearts of superstitious criminals in the back alleys of his hometown, Batman is branching out to more exotic climes in Lego Batman 3: Beyond Gotham.

According to publisher Warner Bros. Interactive, the Dark Knight's latest blocky adventure sees our hero battling Superman villain Brainiac to prevent the destruction of Earth. It seems the hyper-intelligent alien has swiped a handful of Lantern rings and is using their power to shrink worlds for his creepy collection of tiny civilizations. Batman must join forces with the "greatest super heroes and the most cunning villains" to travel through the cosmos, collecting Lantern rings and eventually using their Oan might to topple Brainiac's plot.

Lego Batman 3: Beyond Gotham will debut on November 11. As with all DC Comics/Lego mashups, the game will appear on myriad platforms, including the Xbox One, Xbox 360, PlayStation 4, PS3, Vita, Wii U, 3DS and PC.
[Image: WBIE] 5
In this article: 3ds, comics, dc-comics, lego-batman-3-beyond-gotham, microsoft, nintendo, pc, playstation, playstation-vita, ps3, ps4, vita, Warner-Bros-Interactive, Warner-Bros-Interactive-Entertainment, wii-u, xbox, xbox-one
All products recommended by Engadget are selected by our editorial team, independent of our parent company. Some of our stories include affiliate links. If you buy something through one of these links, we may earn an affiliate commission.